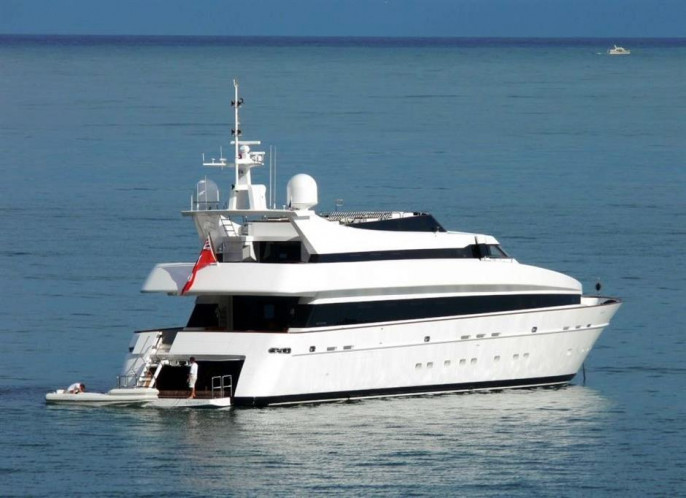 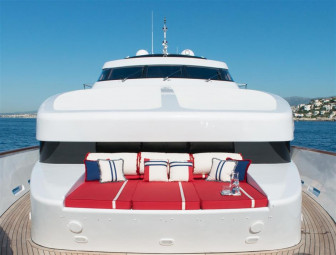 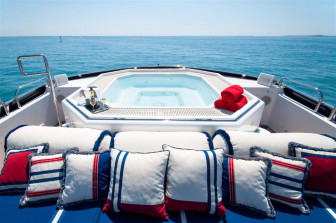 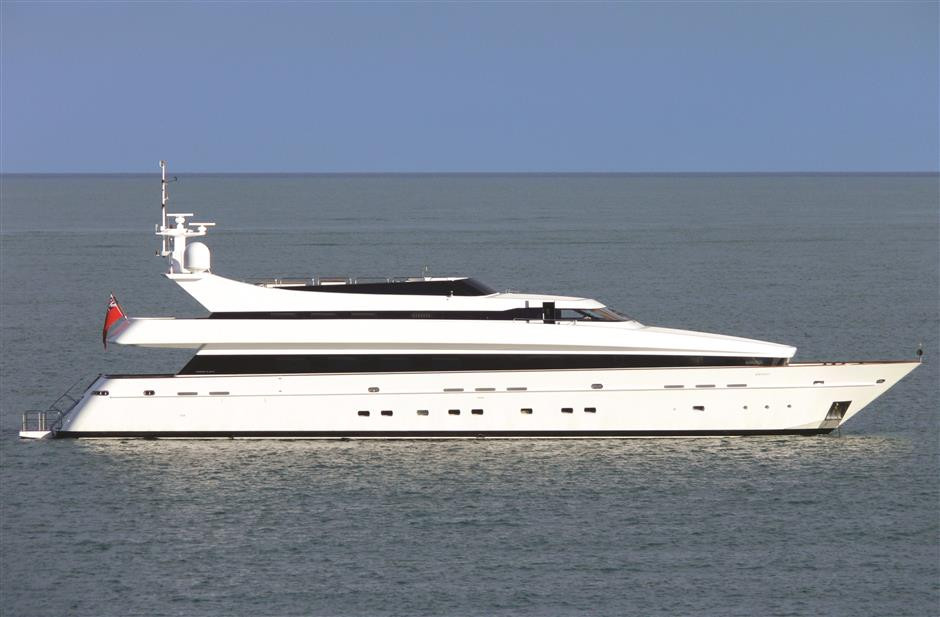 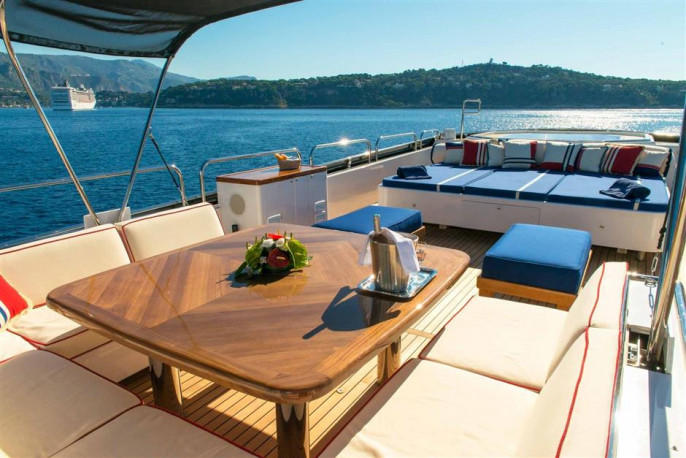 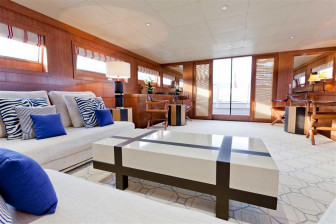 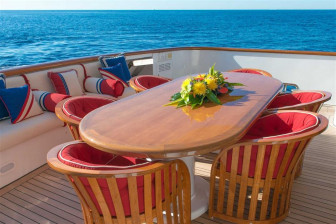 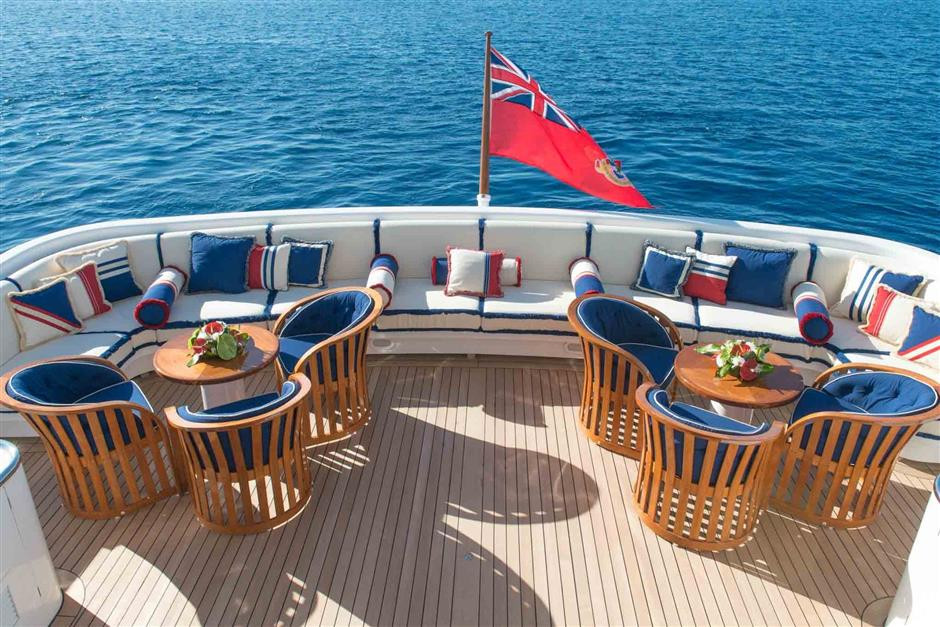 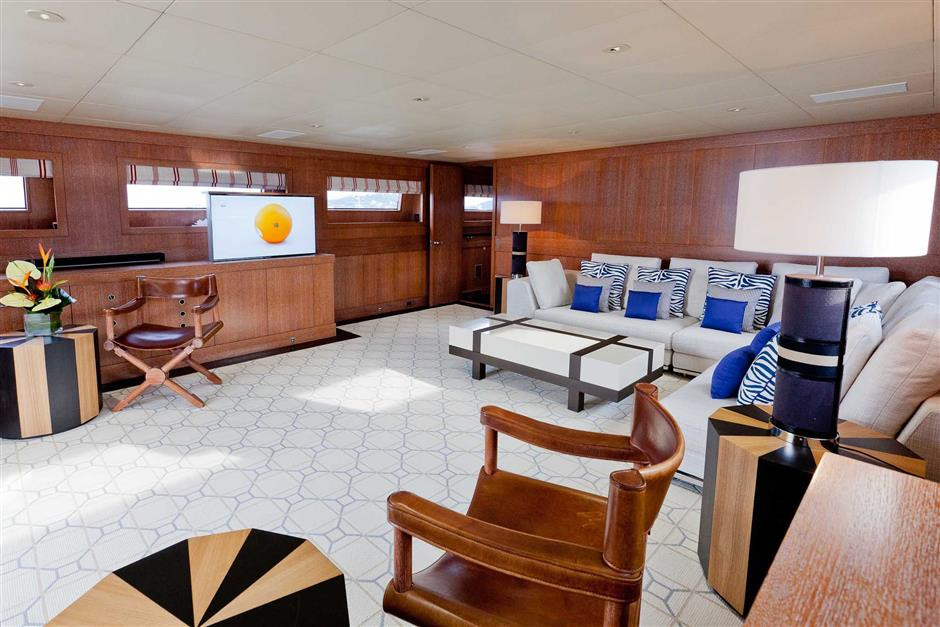 Luxury motor yacht Element, built in 2002 by Italian shipyard Cantieri di Pisa, utilises modest lines and forms to create a super yacht that appears both stylish and sophisticated. With a GRP hull and superstructure, she features design by Cantieri di Pisa while her interior is the work of Frédéric Mechiche. This impressive vessel measures 42.1 metres and can accommodate up to 12 guests.

Motor yacht Element boasts the distinctive austere exterior styling typical of Cantieri de Pisa designs, giving the vessel a streamlined and low-profile appearance. She is the first tri-deck constructed by the shipyard, built for Frenchman who desired a custom motor yacht that was something out of the ordinary. The interior design is formulated to flow effortlessly between rooms and complement the severe lines of the exterior styling.

Each interior space has been made to appear as bright as possible by using light tones and woods throughout. Understated limed teak is employed throughout the yacht creating a more natural appearance with its low-gloss finish. The furnishings follow a similar pattern; chairs and settees covered in white fabric intricately embellished; stained black desks and tables in simple shapes; thin blinds; and old-fashioned keys rather than door knobs.

The bathrooms utilise travertine for the floors and sinks while mosaic tiles embellish the shower spaces. Even the lighting in these rooms have been specially designed to achieve the right balance between natural and artificial light.

The lower deck houses five guest cabins; two double rooms; two twin rooms; and a VIP cabin located forward. The VIP suite is full-beam and boasts a concealed entertainment centre and seating area. Each cabin features a private bathroom. The crew accommodation, also located on this level, is unusually large for a European-designed vessel and consists of four cabins, a large dinette and a separate laundry.

Forward of the main deck can be found the indulgent master suite, complete with a double bathroom separated by a large Jacuzzi bath. This deck also hosts a galley and expansive lounge that includes both a living space and a dining area.

The third deck is occupied mostly by a panoramic second lounge but also leaves just enough space for a Captain’s quarters and cockpit.

Motor yacht Element is crowned by a bright sundeck complete with Jacuzzi and generous sunbathing area. Between the sundeck and skylounge can be found another half-deck level that provides a secluded seating area for quiet meals or time away.

The transom of the vessel features an extra-large door for the tender garage which doubles as a swim platform when let down that is easily accessed from the main deck by two sets of teak steps. Also of note is the size of the superyacht’s engine room, equipped with a full-beam workroom aft.

The luxury yacht is powered by two 3, 7000 horsepower 16V4000 MTU diesel inboards and can reach maximum speeds of 28 knots per hour. She is guaranteed a range of at least 2,000 miles when travelling at 12 knots.

The luxury motor yacht underwent an extensive refit in 2006 at the Monaco Marine La Ciotat service facility and more recent general maintenance and upgrades in winter 2008/2009.

Featuring a dedicated crew, Element is an excellent charter yacht for luxury vacations. The yacht cruises comfortably at 15 to 20 knots while her crew of eight under the direction of Captain Ian Garaty ensure the needs of every guest are met. With such a wide cruising range, the motor yacht is capable of achieving more ambitious itineraries.

The luxury motor yacht is equipped with an armada of water toys to provide endless entertainment during any yacht charter. Onboard water toys include two tenders, Wave Runners, waterskis, a wakeboard, inflatables and a range of scuba diving, snorkelling and fishing equipment.

Element cruises the West Mediterranean during the summer charter season.