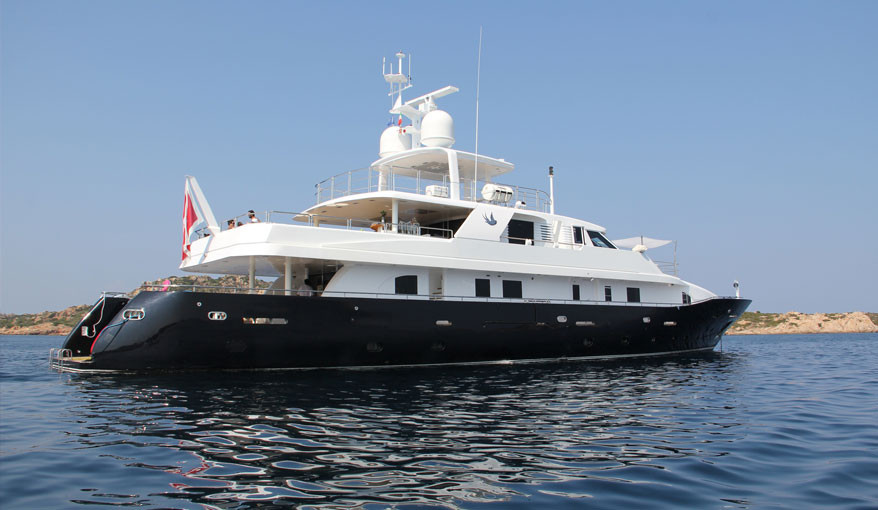 Lady in Blue (formerly Sud) is a 38.86m (127'5"ft) motor yacht, custom built in 1999 by Rossi Navi in Viareggio (Italy). Studio Faggioni Yacht Design is responsible for her beautiful exterior and interior design. She was last refitted in 2005.

Lady in Blue changed ownership in May 2011 and started her COMPLETE refit in September 2011 in Viareggio, Italy.
The refit was done by Rossi Navi as they were involved with the new-build and previous refits.

Exterior:
New/ extra hardtop with communication and radar equipment on top,
extension of upper deck aft of 2 meters,
extension of the stern platform by 1.20 meters including submersible swim platform that will also carry the new 2nd tender,
new forward seating area (in front of bridge)
Exterior superstructure and entire hull will be re-painted,
Several square meters of underwater hull plating has been replaced (found dozens of spots in the steel hull with a thickness of +/- 0.2 mm).
Engine-room:
Main engines and gear boxes have been overhauled, including replacement of entire stern tubes,
New Zero speed electrical stabilisers,
New AC unit,
Over 150 kilogram of rust removed….

Due to the state of the vessel, and lack of maintenance over the last years, 80% of superstructure weldings to main deck structure had to be cut out and replaced.