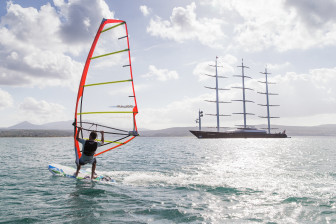 Maltese Falcon is not just a sailing yacht, it is an enormous sail-driven vessel that, under healthy winds, will rocket to record-breaking speeds. Touted as a new class of yacht, this incredible super cruiser can cross the Atlantic in ten days with guests enjoying some of the most luxurious quarters available from any charter vessel on the market today.

Boasting a revolutionary DynaRig sailing system aptly called the Falcon Rig, this 88 metre behemoth has three self-standing and rotating masts which host fifteen sails for an incredible total sail area of 2400 square metres, all of which can be controlled by a single sailor.

Launched in 2006 by Perini Navi and making use of their sail control system, Maltese Falcon has unrivalled performance combined with unmatched safety and manoeuvrability. With a maximum speed of eighteen knots and a range of 3,000 nautical miles at a cruising speed of fourteen knots, Maltese Falcon is the ultimate charter vessel. Whether you desire a super yacht for large scale entertaining between smart anchorages or as a way to experience a once in a lifetime blue water ocean passage, Maltese Falcon is the only way forward.

Maltese Falcon is able to accommodate twelve guests in five lower deck stateroom and one upper deck passage cabin with a private cockpit. A VIP cabin sits on the upper deck and holds a queen-sized berth while the full beam master suite holds a king-sized berth, a separate full beam dressing room and private gymnasium located on the lower deck. Four of the guest staterooms can convert into two enormous VIP suites, each with his and hers bathrooms. All of the cabins on Maltese Falcon hold either king- or queen-sized berths.

The interior of the Maltese Falcon is incomparable and peaks in the atrium where the three glorious decks are united by a circular stairway surrounding the main mast which creates a delicate spiralling effect that is enhanced by the natural light which floods the area through transparent floors, starting at the top deck and cascading down to the decks below. The main deck is an immense open space which features a main saloon, spacious aft-cockpit, two separate studio areas and a majestic formal dining room. There is also a protected sun bathing area and direct access to the cutting-edge wheelhouse, which acts as the heart for the entire vessel.

Maltese Falcon is available for charter in the Mediterranean.