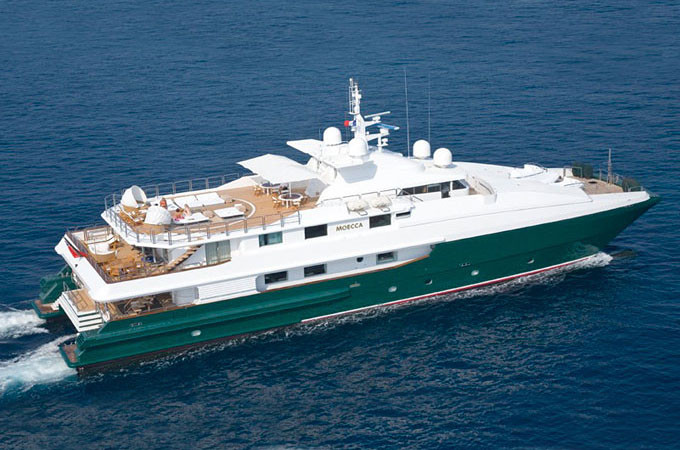 Luxury motor yacht Moecca, built in 1992 by Australian shipyard Oceanfast is a fast, semi-displacement superyacht. With an aluminium hull and GRP superstructure, she features naval architecture by Phil Curran and interior and exterior design by Bannenberg & Rowell. This waterjet powered catamaran measures 45 metres and can accommodate up to 12 guests.

Motor yacht Moecca has almost her entire interior area above water level and offers a range of living, lounging and dining areas indoors and out on deck. She forms part of the fleet belonging to Dragon Blaze; a fractional ownership company. The luxury vessel has undergone many refits in her proud career with the latest performed in 2006.

Being a catamaran, Moecca manages to provide more accommodation space than can generally be found on a yacht of her size. Amongst her six cabins are an indulgent master stateroom; two double cabins; one twin/double cabin; and two single cabins. The master stateroom is located on the upper deck and features a private deck, office, extensive entertainment system, his and hers bathroom and walk-in closet. The two double and one twin cabin are also found on the upper deck while the two singles are located on the lower deck. Each guest accommodation features an en suite and entertainment system.

Luxury yacht Moecca is powered by two MTU 7,000HP/5,000kW engines that allow her to reach a maximum speed of 16 knots. She can achieve a range of 2,250 nautical miles while cruising at a speed of 12 knots.

Featuring a dedicated crew, Moecca is an excellent charter yacht for luxury vacations. The yacht cruises comfortably at 12 knots while her crew of 13, under the direction of Captain Svensson, ensure the needs of every guest are met.

The luxury motor yacht is equipped with an armada of water toys to provide endless entertainment during any yacht charter. Onboard water toys include tenders, Seabobs, Wave runners, kayaks, windsurfers, kneeboards, waterskis and a range of snorkelling, diving and fishing equipment.

Moecca cruises Singapore and Southeast Asia during the summer and winter charter seasons. The luxury vessel has been built to Det Norske class and is fully MCA compliant.