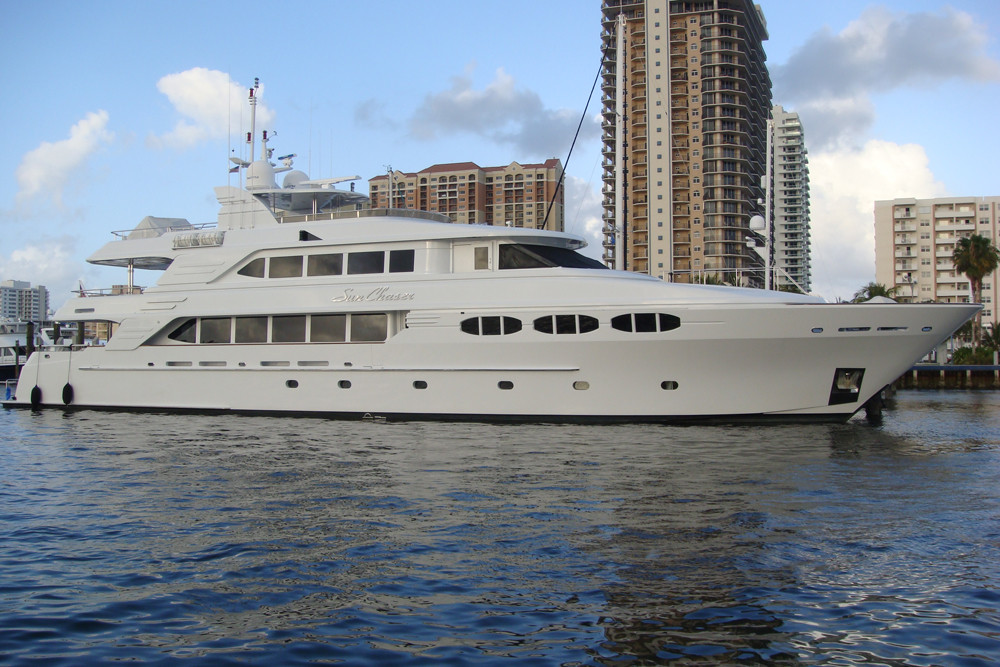 Luxury motor yacht SunChaser was built in 2007 by Canadian shipyard Richmond Yachts and is designed for long-range cruising. With a GRP hull and superstructure, she features naval architecture and exterior design by Setzer Design Group and the interior work of Pavlik Design Team. This twin screw superyacht measures 43.28 metres and can accommodate up to 12 guests.

Motor yacht SunChaser is a tri-deck super yacht with a hull designed from the same mould as the 42 metre Status Quo. She is the third hull to be built in the series and is Richmond’s first 43 metre vessel. Sun Chaser herself was inspired by the Sovereign 138 built at the facility that would one day become Richmond Yachts. Owned by an Arizona businessman, the luxury yacht is built to A.B.S class and M.C.A code.

The layout of the yacht includes a bridge-deck VIP suite that completes the desirable six-stateroom interior. Amongst her six cabins are an indulgent master stateroom; a VIP suite that houses the Captain; and four guest cabins. The master stateroom on the main deck features a large bathroom and a study/office area at its entry.

Sitting temptingly on the flybridge/spa deck of the vessel is a huge Jacuzzi and nearby half-moon shaped bar with five stools. The bartender can serve forward to the stools and aft to the hot tub. A dayhead was also added on the spa deck, reducing traffic flow below on sunny days. A tender is secured aft and there is a small crane for launching Jet Skis off the bow.

The skylounge is made for entertaining with its leather chairs and couches, large TV and bar complete with backlit bottle stowage. The main deck houses a generous galley and dinette.

Luxury yacht SunChaser is powered by two 2,000 horsepower 16V2000 engines that allow her to reach a maximum speed of 19 knots. She can achieve a range of 3,000 nautical miles while cruising at a speed of 15 knots. The yacht cruises comfortably at 16 knots while her captain and crew of seven ensure the needs of every guest are met.