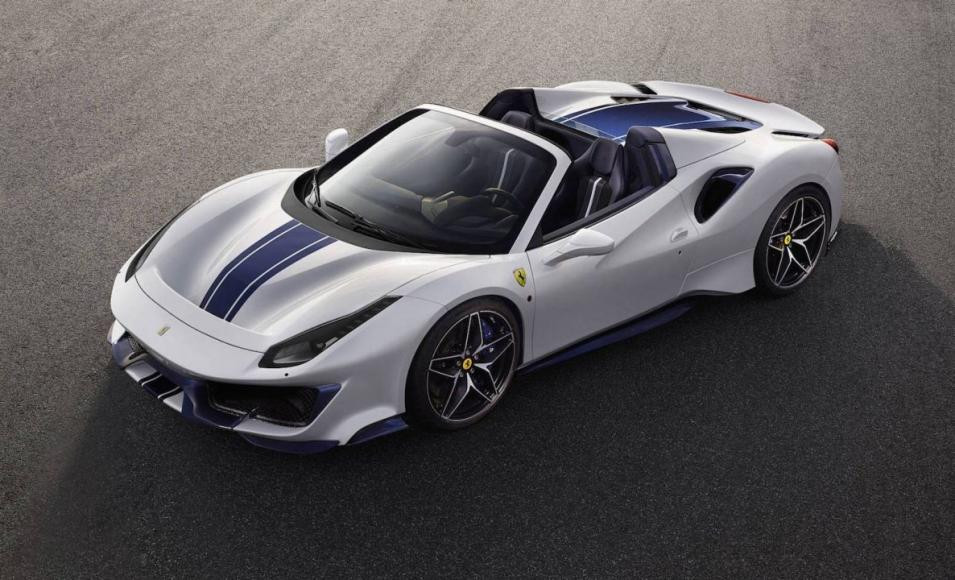 488 Pista Spider The Most Powerful Ferrari V8 Convertible Ever

Italian marquee Ferrari have unveiled a new soft top version of their 488 Pista Spider coupe, said to be the most powerful Ferrari V8 convertible ever.

Officially unveiled at the recent Pebble Beach event in California, the new model is the 50th convertible in Ferrari’s history and is wrapped in a colour scheme of white with blue stripes – a nod to the American flag that is intended as an acknowledgement of its debut on American soil.

The Maranello-based automaker says that the new 488 has been created with knowledge gained from the 488 Challenge and 488 GTE race cars.

The car shares the same 3.9-litre twin-turbo V8 with the coupe variant, but it has been tuned to put out 711 hp and 568 lbft of torque.

In terms of performance, the new Spider’s 0-62 mph sprint time of 2.85 seconds is the same as that of the coupe, while it takes 0.4 seconds more in the run from a standstill to 124 mph which is completed in 8 seconds. The Spider also mirrors the 211 mph top speed of the coupe.

It also has a relatively light curb weight of 3,042 pounds, which has been achieved by the extensive use of carbon fibre and other lightweight materials in its construction.

The cabin is wrapped in Alcantara and carbon fibre, while the floor mats have been replaced with aluminium plates. You also get thin leather straps instead of door handles.

Since the 1950s, North America has been the biggest market for high-performance convertibles.