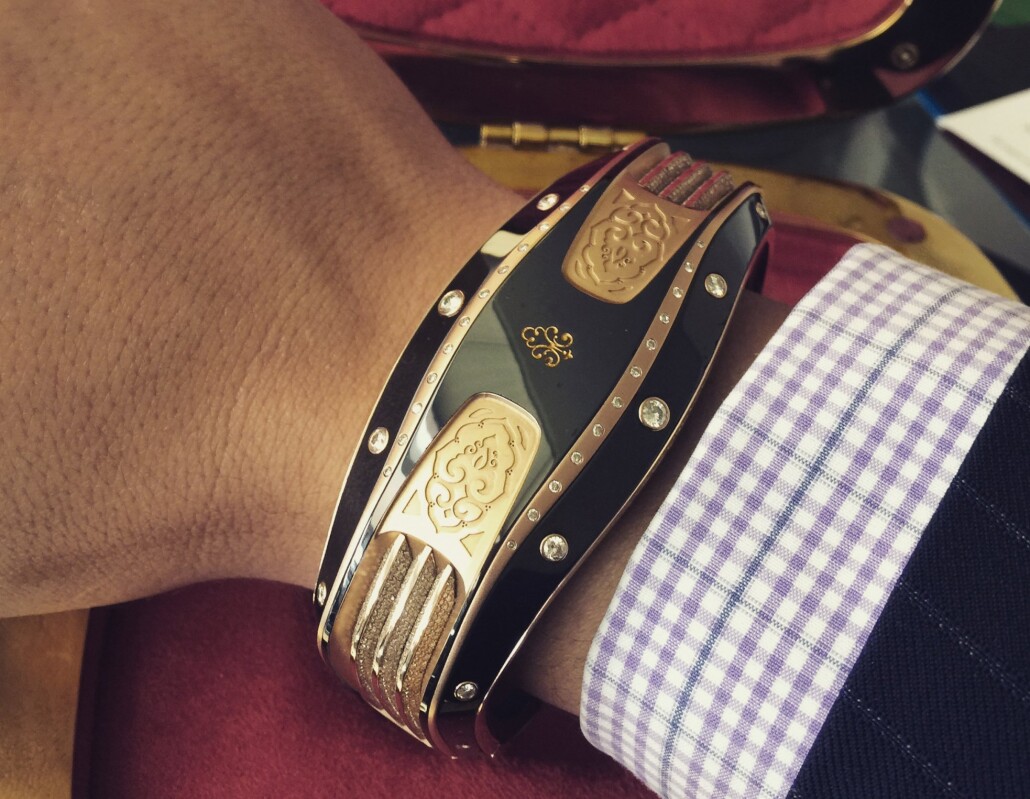 As far back as can be remembered there has been a schism between the two sexes when it comes to high-end jewellery. While women have always bedecked themselves from head to toe in extravagant trinkets, men have traditionally been more reserved in their choice of self-ornamentation.

One company hoping to bridge that divide is Christophe & Co, who, in collaboration with iconic Italian car design studio Pininfarina, have created a remarkable collection of men’s bracelets billed as combining classic craftsmanship with avant-garde technology.

We caught up with Aleksandr Bernhard, Founder and CEO of Christophe & Co, to learn more about the inspiration behind the product, its various customization options, and more.

Superyachts.com: Can you give us some background to Christophe & Co as a brand?
Aleksandr Bernhard: I founded Christophe & Co because I wanted to create an extraordinary symbol of achievement for very successful individuals, specifically men. I have always been inspired by individuals who emerged victorious over seemingly insurmountable barriers and I had the fortune of doing business with many of these individuals for a number of years.

During that time, I became convinced that there was a necessity to create a wearable trophy for these inspiring individuals to have as a symbol of their great victories. Many of these individuals were both fine watch collectors and exotic car collectors, therefore it only made sense to integrate the artistry of precision watchmaking with the masculine design of sports cars into our pieces. The idea was that the pieces themselves would be timeless, collectible, and incorporate craftsmanship of the highest order.

SY: What are some of the bracelets’ most notable features?
AB: The most notable features are certainly in the aesthetic and material realm. The designs that Pininfarina has created are simply revolutionary. From a material perspective, the technical ceramics are certainly the most challenging. Technical ceramics have their origins in industrial applications where there was a need for a highly scratch resistant and durable material.

More recently this material made its way to watches and jewellery but never on this scale. The ceramic 'shields' on our pieces are the most complex pieces of aesthetic ceramics ever created. And what makes the pieces so special is that every component of the highly complex assemblies has its own story. Whether it be the precision machined carbon fibre inner frame, made by a supplier to a winning Formula 1 team, or the kinetic rotor generation system used to power the optional technology module, every single component is executed on a level never before seen in jewellery. Just to top it off, the cases in which the pieces are housed, known as 'Vaults' are veritable treasure boxes built by some of the most skilled woodworking artisans in the world.

SY: How many editions are there, what do they cost and where are they available to purchase?
AB: At the moment there are three highly limited editions with varying tiers of refinement and features. The third tier model, known as Virtus, is limited to only 300 pieces worldwide and has a price of $75,000. The middle tier (my personal favourite), known as Orion, is an even more limited 100 piece edition with a price of $98,000. The most exclusive of the three, with only 25 pieces ever to be made, is our Apollo model, with a price starting at $149,000. Each piece represents a new paradigm in men's jewellery and they are truly unique in the world. At the moment, they are only available directly from the company.

SY: What personalisation options are available on the bracelets?
AB: Each model has its own personalisation options such as using different precious metals, for example platinum versus 18k rose gold. They are also all custom fit to each client. If the wearable technology module is chosen, its functionality can also be customized for each client's desire. On the top tier Apollo, we have commissioned an award winning UK artist to create cultural specific engravings for different regions. If a client desires a one of a kind commission of their own, we can do that for them. Or they can take the route of having us engrave an image that has personal importance to them whether it be a family crest or something even more personal.

SY: What are your general thoughts on the growing trend for wearable technology?
AB: As a sector, wearable tech has been a long time coming. With the miniaturization of key technology components, it was only a matter of time before hardware would be worn on the body. What is still lagging, however, is energy storage.

Generally speaking, in even just a few years but definitely a decade from now, we will look back at all of these mass production items and view them in jest, much the same way we see typewriters today as comical. These, in fact, are the keys to our products' success in the realm of wearable technology. Because of the fact that our aesthetic designs are timeless and our technology is modular, we created our Christophe & Co Armills with an eye towards the future. They are built in such a way that the technology can be upgraded and switched out very easily at any time, therefore, even 10 years from now, a Christophe & Co Armill will be just as beautiful and technologically relevant as it is today. This is not something that I think can be said about any other wearable technology product on the market today.

In addition, the advanced power management system in our module employs a one of a kind kinetic energy generation system to charge the battery using the natural motion of the user's arm, thereby greatly reducing (and in some cases eliminating) the need to recharge. Where every other company has created products that will only have relevance for a year or two, maybe less, we have created a timeless collectible that will never be obsolete.

SY: What convinced you that Pininfarina were the right company to collaborate with?
AB: I wouldn't say ‘convince’ is even the right word. Ever since I was a child, I viewed their automotive creations as god-like. Whether their classic Ferraris or even the most recent creations, the designers at Pininfarina have talent like no other. Everything they design has a look that even 200 years from now will be viewed as beautiful. This is not something that can be said of just about any other design studio. To be able to bring our vision for this ultimate symbol of achievement to reality with Pininfarina just made perfect sense. And the result speaks for itself.

SY: Why do you think haute joaillerie for men has until now been mainly restricted to watches?
AB: That's a very good question and I believe the primary reason is that if you look at nearly every other piece of jewellery created for men in the past, it has been an adaptation of what was originally a female design. Even today this is overwhelmingly the case. In the realm of Haute jewellery at our level, men are generally very interested in a design idiom that is masculine, mechanical elements, and technology.

It just so happens that many fine watches fit this bill very well, but it doesn't mean watches are the only creation that can appeal to men. So we thought, why not create another option in this realm; one which integrates masculine design inspired by the greatest sports cars of all time (and in fact designed by the same people who created those legendary vehicles), and also integrate precision mechanical elements and technology.