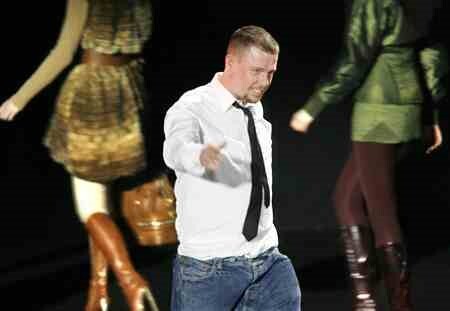 Two dresses from Alexander McQueen's Autumn/Winter 2007 ready-to-wear collection will be included in the Vision 21 Sale at Bonhams, Knightsbridge on 30th June 2010.

The Auction is set to include a stunning gold, floor length dress worn by Holly Valance at this year’s Brit Awards, which will reportedly go for around £12,000 – £18,000. The dresses are among the first to go to auction since the eminent designer's death in February.

Another item will be the gorgeous, natural cream gown with peacock feather bustier which has been estimated to sell for around £10,000 - £14,000.

According to Luxist and Vogue UK, the collection was inspired by McQueen’s distant relative, Elizabeth How, who was said to have been convicted of being a witch during the Salem Witch Trials of 1692.

To honour this, McQueen put on a show in 2007, which saw these stunning dresses displayed with models walking out on a Ouija board as a screen with projected images of cockroaches and burning witches, creating one of McQueen's most dramatic fashion shows.

The Vision 21 Sale will be held at Bonhams, Knightsbridge on 30th June 2010 and will include work by some of the top names in art and design.