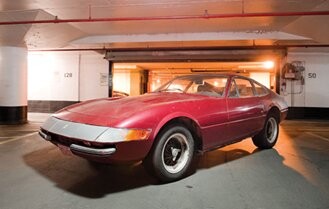 An all-original 1971 Ferrari 365 GTB/4 Daytona Berlinetta, which recently emerged from 25 years in storage, will make its auction debut at RM Auction’s Amelia Island sale in Florida next March.

Offered on behalf of its first and only owner, this timewarp Daytona, chassis no. 14385, surfaced last month following two-and-a-half decades in a downtown Toronto parking garage.

Dubbed “The Condo Find Daytona,” or “the Disco Daytona,” in reference to the eight-track tape of “Disco Rock” still stuck in its K-Tec player, the Daytona was an impulse buy for Toronto businessman, Patrick Sinn.

Sinn took possession of chassis 14385 in the summer of 1971 and spent a month touring in his Ferrari Berlinetta in Europe before bringing the car back to North America on board the Queen Elizabeth II.

At 77 years of age, Sinn has now made the decision to the part with the car, which will be offered accompanied by a complete tool set and manuals, as well as the “Disco Rock” 8-track.

The Daytona joins a growing roster of blue-chip collectibles secured for RM’s Amelia Island sale at the Ritz-Carlton. Additional highlights will include a 1938 Bugatti Type 57C Aravis Cabriolet by Gangloff, a 1970 Maserati Ghibli Spyder, and a 1927 Stutz Vertical Eight Black Hawk Two-Passenger Speedster.