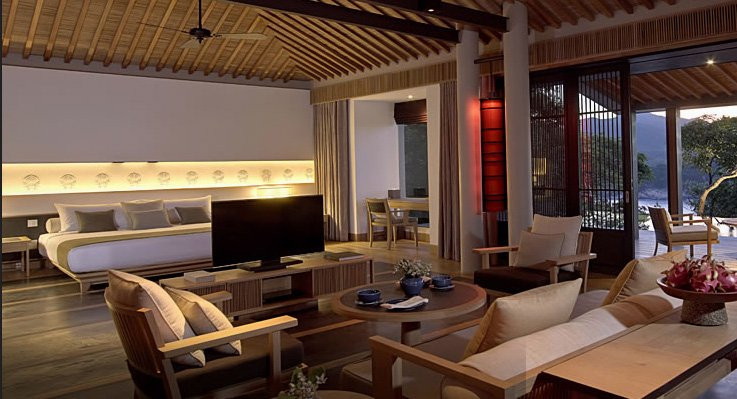 Amanresorts are to open a contemporary beachside resort and Aman spa on the shores of the East Sea in Vietnam next month.

Named for the Sanskrit derived word for 'peace' and no'i meaning 'place', Amano'i has 31 guest pavilions, a number with private swimming pools, and five Aman Villas, all positioned on the hillside with impressive views. The resort includes a full-service Aman Spa and an expansive Beach Club.

Inspired by a traditional Vietnamese communal hall, the central pavilion occupies the hilltop and houses the restaurant, bar and an expansive terrace, all making the most of the spectacular views.

The resort's library offers a range of reading materials in several languages, together with a music collection and board games, while the boutique features a selection of traditional Vietnamese lacquerware, handmade jewellery and local bronze, copper, pottery and ceramic items.

Next to the central pavilion is the cliff pool, one of two swimming pools, whilst the second is located at the Beach Club, which is overlooked by magnificent granite cliffs and offers lounging and dining areas, as well as a large rim-flow pool. A complete range of water sports equipment is provided including snorkelling gear and kayaks.

Nui Chua National Park protects an area of more than 29,000 hectares of pristine coastal and marine habitats in Ninh Thuan Province and it is on the dramatic coastline of this National Park - one of the country's largest natural conservation sites - that Amano'i is situated.

The launch of Amano'i completes an Aman circuit of Southeast Asia which began in 1988 with the opening of Amanpuri on the Andaman coast of Phuket.