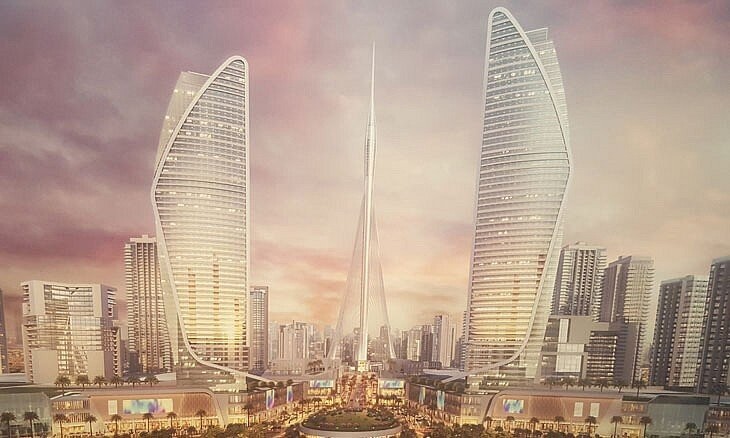 “World’s Tallest Tower” to be Built in Dubai

The $1 billion Tower at Dubai Creek Harbour will be a “notch taller than Burj Khalifa”, though the official height was not revealed during last weekend’s announcement.

The structure will face competition from the 1,000 metre high Kingdom Tower in Jeddah, currently being built, for the ‘tallest in the world’ title, which will exceed the height of the Burj Khalifa, which stands 828 metres tall.

The Tower at Dubai Creek Harbour’s design was inspired by the Islamic “minaret” structure as well as a lily bud. It will house a boutique hotel along with residential and leisure features, including a panoramic viewing deck ‘The Pinnacle Room’, and a VIP landscaped observation deck.

Other notable features will include fully glazed rotating balconies that extend outward.

The Tower was designed by Spanish architect Santiago Calatrava, the brainchild behind renowned buildings across the world including Rio de Janeiro’s Museum of Tomorrow, Athens Olympic Sports Complex, and Malmö’s Turning Torso Tower.

The Tower at Dubai Creek is expected to be completed in time for the Dubai Expo trade fair in 2020, the same year that the Kingdom Tower in Jeddah is due to be finished.