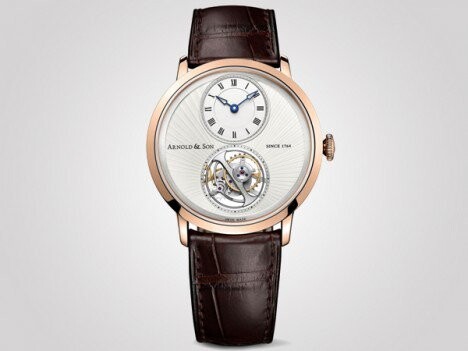 Measuring just 2.97mm, the new A&S8200 tourbillon calibre comes in at more than 0.5mm thinner than Piaget’s Caliber 600P, which is now relegated to the world’s second thinnest tourbillon.

The watch also boasts a double barrel configuration for 80 hour power reserve – an impressive figure for an ultra-thin tourbillon.

Other notable features include an entirely spherical 14mm tourbillon cage that rises out of the movement and sits at the same height as the hour and minute hands.

The A&S8200 tourbillon is available in a choice of red gold ($70,185) or palladium ($61,075), as part of a limited run of just 50 pieces each. The red gold model comes with an additional hand-engraved tourbillon bridge.

Arnold & Son was founded by John Arnold in London in 1764.