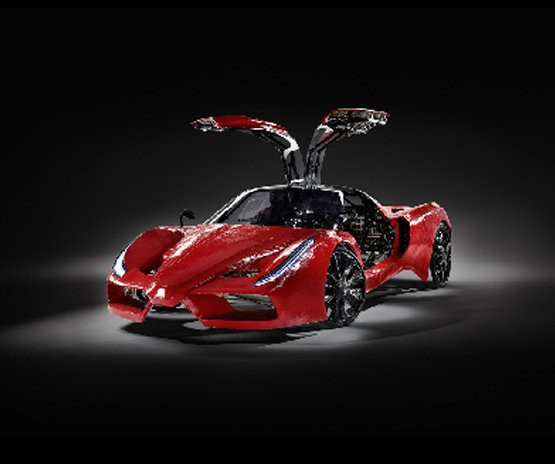 An Austrian artist has designed a unique car that is designed to look like a Ferrari but in fact runs off of pedal power.

Built by Johannes Langeder as a sequel to his pedal-powered Porsche 911, the Fehrradi Farfalla FXX is inspired by the high-performance Ferrari FXX, which was built purely for use by exclusive clients on special track days approved by Ferrari.

However, instead of the Ferrari’s 6.3 L V12 engine, the two-seater Fehrradi Farfalla FXX comes with an 11-gear, pedal power system.

The car has been constructed from the ultra light tubes and strong adhesive connections, with its low-slung body housing a strong aluminium frame which allows the rider to pedal through the road traffic.

The name of the car is derived from "fahrrad", which is German for “bicycle”, and "farfalla" which is Italian for “butterfly” – a reference to the car’s angle gear which moves the wing doors while driving, resulting in a wing beat similar to that of a butterfly.

It made its world premiere at the Lentos Museum of Modern Art in Linz, Austria, where it will be on display until 4th July.

The Fahrradi Farfalla FFX is available to purchase priced at $1.6 million.