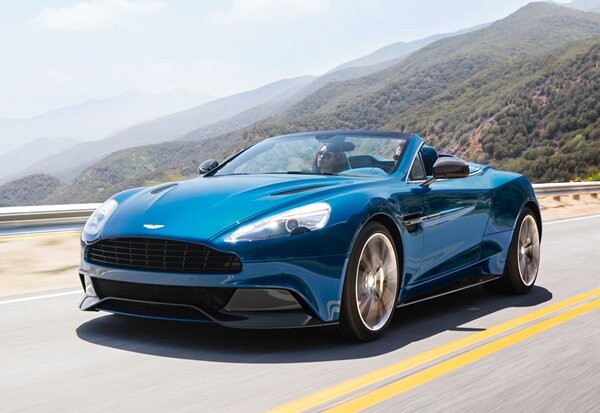 British luxury car makers Aston Martin drew back the curtains on their new Vanquish Volante convertible earlier this week – the brand’s first ever open top that comes with a complete carbon-fibre body.

A direct descendant of the original Aston Martin Vanquish, the new car is claimed to boast the stiffest Volante body structure yet created by the engineering team at the brand’s global HQ in Warwickshire, England. Volante is the name given to convertible versions of various Aston Martin models from 1965 onwards.

The new car’s triple-skin lightweight fabric roof takes just 14 seconds to fold, while its boot loading capacity is more than 50% per cent higher than the DBS Volante, with or without the roof down.

The car also boasts the same styling features as the Aston Martin One-77, including an elegant waist, elongated side strakes and LED rear light blades. It also comes with a full length windscreen – a first for Aston Martin – with the glass panel of the car stretching high enough to meet the fabric roof.

Interior features include full grain Luxmil leather with optional quilting, metal controls, and satin chrome trim, and a Bang & Olufsen BeoSound system that monitors and adapts based on open-top conditions.

Prices for the 2014 Aston Martin Vanquish Volante will start from £199,995, with the first cars delivered to UK customers by the end of the year. American deliveries are expected to begin early next year.