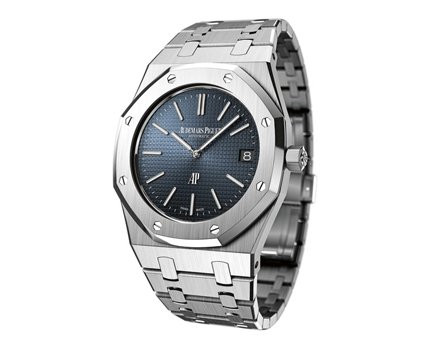 Amongst the array of watches on show at the 2012 SIHH watch fair in Geneva, which came to a close on Friday, was a special edition of Audemars Piguet’s famous Royal Oak Jumbo timepiece.

The new Royal Oak Extra-Thin timepiece, which was unveiled for the first time at the Geneva show, has been created to celebrate the watch’s 40th anniversary, and features several of the same elements distinct to the 1927 original.

Amongst the nods to its illustrious past are the watch’s sizeable 39mm diameter (considered completely outsized 40 years ago), an extra-flat case, a blue dial, and the AP initials in white gold at their original position of 6 o’clock.

At the technical heart of the watch is the same movement as the original – the renowned, mechanical self-winding Calibre 2121, boasting a thickness of jus 3.05mm.

One of the world's most historical and famous watch-makers, Audemars Piguet was founded by Jules-Louis Audemars and Edward-Auguste Piguet in 1875.