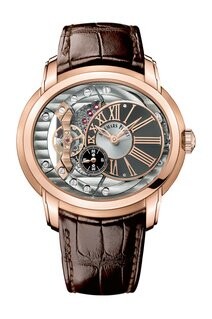 The Spring/Summer 2014 collection presentation held at The Pierre, the legendary hotel on Fifth Avenue, was the perfect setting to showcase Audemars Piguet’s collection.

The inspiration for the season was the innate style of French men. The colour palette of balloon red, French blue, white, navy, pineapple yellow and sage green was delivered in an exquisite collection encompassing men’s tailored clothing, sportswear, and accessories with many looks complemented by an Audemars Piguet timepiece.

“This season I wanted to do something more colourful, more joyous – play around a bit more with pattern mixing and unexpected styling, in a loose, easier, sexier way that typifies to me the best of French men’s style, Bastian said.

“The inspiration initially came from observing the French guys in my life, as well as movies such as The Red Balloon, The Dreamers and the classic movies of Jacques Tati. I also drew inspiration from the incredible spirit and joyfulness of the late America designer Patrick Kelly--- no one loved Paris more than he did.

“I often think the true essence of a place can only be reflected through the eyes and experiences of an outsider, and for me, Patrick’s vision of Paris – bright, romantic , frenetic, sexy and chic – is the one that stays with me.”