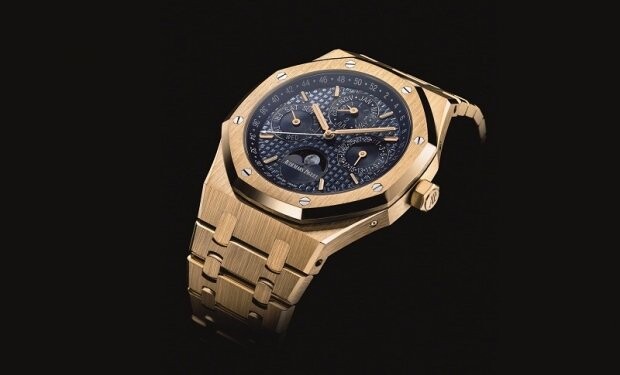 Swiss luxury watchmakers Audemars Piguet have created a new version of their iconic Royal Oak timepiece to be unveiled at the SIHH watch fair in Geneva in January.

The first Royal Oak was launched by Audemars Piguet in 1972 and was considered a highly innovative piece, thanks to its stainless steel that was worked and polished like a precious metal.

Now the brand has updated the legendary range with a new version boasting an 18-carat yellow gold case and a blue dial with a “Grande Tapisserie” pattern of three dimensional squares.

It displays the perpetual calendar subdials with month, hour, minute, and date indicators at three o’clock, the day at nine o’clock, the month and leap year at midday, and the moon phase at six o’clock

On the dial, the applied hour markers and hands are in yellow gold, with a luminescent coating for better readability in the dark, while the watch’s bracelet is also in 18-carat yellow gold with a folding clasp.

Other notable features include a new self-winding calibre 5134 movement visible through the sapphire back, while the watch has a minimum power reserve of 40 hours.