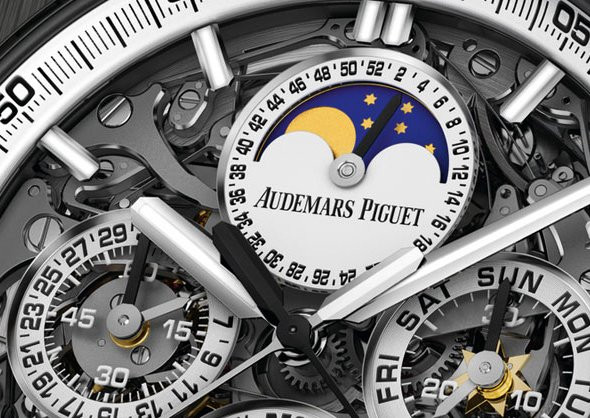 Launched at the SIHH watch fair in Geneva in January, the latest Royal Oak model is billed as Audemars’ first sport grand complication.

The watch comes in a 44mm titanium case accented by a ceramic bezel, crown, and pushers, and features a AP calibre 2885 movement, with split-seconds chronograph, perpetual calendar, and minute repeater.

The entire watch is openworked, allowing you to see the intricate finishing put into its construction, which took over 860 hours. Meanwhile the split-seconds chronograph (activated via the crown) features a column-wheel mechanism, while the striking mechanism consists of two gongs on the same level.

Other notable components include 52 jewels, bridges finished with both rounded-off and polished bevels, satin-brush flanks and circular grained recesses, and a 45 hour power reserve.