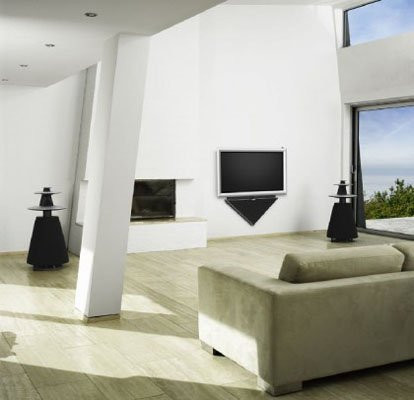 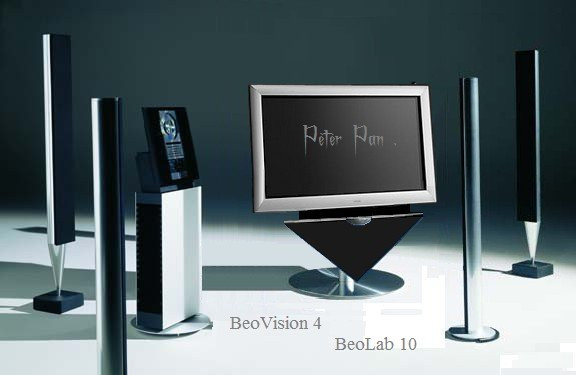 Danish audio and video product manufacturers Bang & Olufsen have created BeoVision as the tv of the future.

Utilizing a Panasonic 103-inch plasma display panel and making use of an $111,000 re-design, the BeoVision is a juggernaut of jaw-dropping functions and incredible capabilities.

Once turne on, the 600-pound monitor rises from three inches to two feet off of the floor, exposing the BeoLab 10 center channel speaker, whose triangular form moves forward once the monitor has attained its full height. Worried parents, or pet owners, will be relieved to find that there is a fail-safe tension sensor so there is no possibility of the heavy monitor crushing anything or anyone as it lowers. The televisions elevator mechanism also enables it to rotate 20 degrees to the left or right and to tilt 4 degree forward or backward.  The base itself weighs another 600 pounds, though it is possible to have the television wall-mounted. Equipped with a colour-management sensor that measures and adjusts colour contrast and brightness automoatically in accordance with the amount of light in the room, the BeoVision 4 also has a 100,000-hour screen life as well as a three-year warranty.

Once a client expresses interest in purchasing the television, representative from Bang & Olufsen's network of dealers and installers will talk them through the process in order to ensure that the installation environment will be adequate to support the massive 1200-pound weight of the system. After this, the television is built to the client's specifications then delivered through Bang & Olufsen's signature white-glove service. Requiring a certain standard of living, Dave Zapfel, Bang & Olufsen's American product manager put it thusly: "Customize your environment to fit your lifestyle."

"Customize your environment to fit your lifestyle"

"Customize your environment to fit your lifestyle"