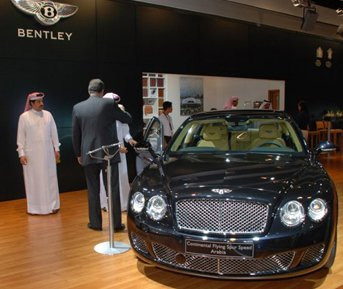 Bentley Motors, the luxury UK car maker, is to spend up to $9 million in the next six months on its Middle East operations as it strives to capitalise on the region’s burgeoning car sales.

The Volkswagen-owned brand sold 7,000 cars in the region last year, bucking the trend of decreased car demand seen in larger markets such as the US and Europe. These strong figures also came in the face of the Arab Spring uprisings, which saw significant instability across North Africa and the Middle East.

This week Bentley has been showcasing some of its models at the Qatar Motor Show in Doha, including the retouched version of the Continental GTC convertible and the Mulsanne saloon.

Talking at the Qatar Motor Show, Chris Buxton, Bentley regional director for the Middle East, Africa & India, said: “It not the biggest market in the world, but it has been very consistent.

“There is a lot of investment going on here. Over the next four or five months it is probably five or six million pounds ($9.3m) worth of investment.”

The Gulf has proved a growing market for luxury car sales, with several brands recording record figures over the last 12 months.