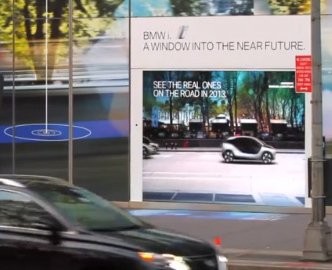 The BMW I Born Electric Tour took to the streets of Manhattan, with the BMW i3 and i8 Concept Spyder models receiving admiring glances from the city’s street walkers and fellow motorists alike.

There was also an eye-catching digital element to the New York leg of the tour, with each vehicle featuring a digital window that turned the reflection of cars passing by into their own electric vehicles.

With its zero-emissions all-electric engine and a range of 80-100 miles, the next generation BMW i3 Concept is designed mainly for city use, and is expected to go into mass production in 2013. The new i8 Concept Roadster is also expected to be available from next year.