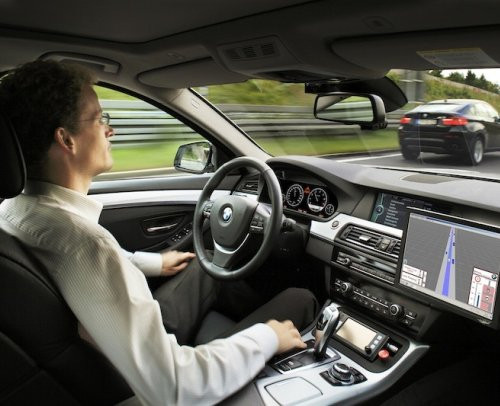 BMW have released a video showing its progress in the development of a self-driving car concept that the German brand believe could become reality within the next 10 to 15 years.

The video shows a prototype of the car – which resembles a conventional BMW 5 Series – being tested on Germany’s speed-limit free autobahn, controlled by a complex range of sensor systems, including radars, cameras, laser scanners and ultrasonics.

Assisted with real-time GPS data, the test vehicle is able to manoeuvre around any area mapped by the car’s manufacturer, even changing lanes when required. The car still requires a ‘driver’, but the ambition is for him to not have to interfere with the vehicle’s movements at all.

"In principle, the system works on all freeways that we have mapped out beforehand with [a] centimetre accuracy."

BMW first announced plans to invent a self-driving car last August. The company believe that the car, which has already embarked on several hundred miles of research driving, may be only 10-15 years away from being ready for market.