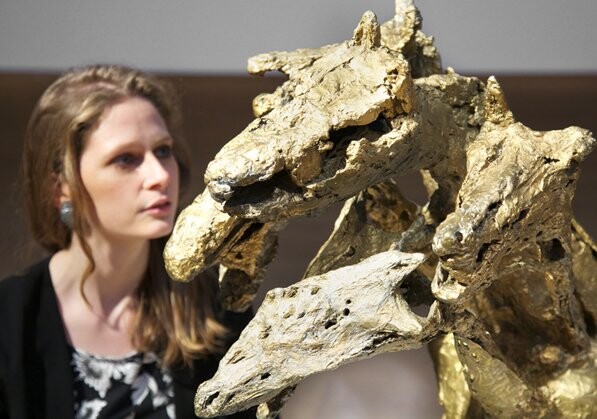 A selection of masterpieces in Bonhams’ Post-War and Contemporary Art sale taking place next month will address one of the most surprising anomalies in today’s market – the lack of representation of female artists.

In 2012, only 6.5% of the works offered at auction were by female artists and there remains a massive correction in the startling disparity between the results of male and female artists seems inevitable.

But change is afoot, and in a bid to redress this imbalance, Bonhams is dedicating a distinct section of the February sale to exploring the careers of a selection of key women artists through individual works but also within the context of the period.

The artists in this section will be connected by gender, but this is of secondary importance to their crucial unifying theme: their potential.

One of the top lots in the sale, Germaine Richier’s Le cheval à six têtes will lead the section with an estimate of £200,000-300,000. Created in 1954-56, the haunting, metre high sculpture epitomises the French sculptress’ defiantly independent vision and spectral aesthetic.

“Richier was one of the first female sculptors in the world to achieve critical acclaim within her lifetime, so it feels fitting that Le cheval à six têtes, one of her most striking works, leads this pioneering section,” says Ralph Taylor, Bonhams Senior Director of Post-War and Contemporary Art.

“Our auctions explore value in all of its definitions,” he added. “The works in this selection are connected by their existence in an undervalued area of the market but, more significantly, each has a distinct and fascinating individuality. Bonhams is proud to be at the forefront of this shift in the market.”

Further highlights include a powerfully evocative watercolour, ink and crayon drawing on paper by Yayoi Kusama, a key inspiration to Pop Art master Andy Warhol. Estimated at £25,000-35,000, the work was created in 1952 – at the very beginning of Kusama’s career as one of the most important living Japanese artists.