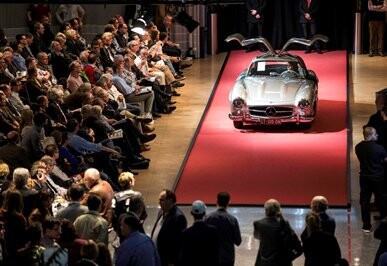 The second edition of the Bonhams Mercedes-Benz auction took place in Stuttgart, Germany last week, resulting in a total sale of $13 million.

An impressive 92.9 per cent of lots received prices that either matched or exceeded their value, with a spectacular 1938 540 K Cabriolet A proving the top lot in the sale.

It was the time the 540 K had been publicly offered, with the hammer finally falling at €2.76 million to a private German buyer.

Other highlights included a 1931 770 “Grosser Mercedes” Cabriolet D, one of only 18 produced, which sold to an auction room bidder for €2.31 million. Meanwhile a quartet of iconic 300SL motor cars, both Gullwing coupés and roadsters, achieved excellent prices, with the top lot of the series a1960 Mercedes-Benz 300SL Roadster, which received $1.12 million.

Malcolm Barber, Bonhams Co-Chairman and auctioneer for the day, said: “With a full sale room, active internet bidding, and international bidders both in the room and on the telephone, we saw spectacular prices for cars in exemplary condition and with great provenance.

Bonhams motoring department will host their annual single-marque Aston Martin Works Sale on May 9th, followed by the Spa Classic Sale, taking place on May 24th.