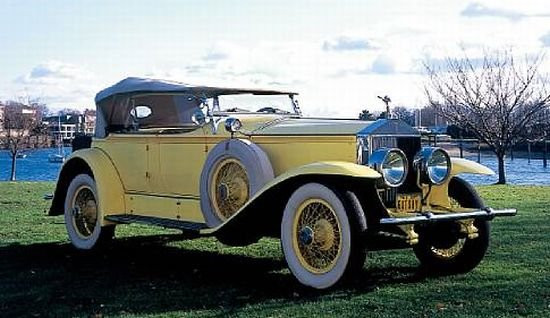 Boasting more than 80 cars for sale, many offered at no reserve, Bonhams, the venerated auction house, is announcing this years Greenwich Concours d'Elegance Auction to be their largest ever.

The 1929 Rolls-Royce Phantom I Ascot Tourer starred in the 1971 movie of F.Scott Fitzgerald's homage to the Roaring Twenties, The Great Gatsby. Featured heavily throughout the film in conjunction with lead actor Robert Redford behind the wheel, the pristine Phantom I is expected to garner between $150,000-200,000.

Another notable car is that of the 1938 Packard Darrin convertible which is considered to be Howard 'Dutch' Darrin's earliest Packard designs and was once owned by Clark Gable, who was himself an avid car aficionado. The Darrin convertible is expected to go fetch between $175,000-250,000.

A rare 136 Single Eight Sport Model belonging to renowned author Edith Wharton, whose Victorian pen produced such classics as 'The Age of Innocence' and 'The House of Mirth'. Her beloved Single Eight is expected to sell for between $30,000-40,000.

Rupert Banner, a specialist who is overseeing the auction had this to say about the Leonard collection:

"Ted Leonard was a well-known and much-liked enthusiast and user of his collector cars. Building his collection in the earlier days of the hobby, he was able to assemble an incredible group of famous owner cars, which would surely be impossible to source today; its dispersal offers a superb opportunity for collectors."

Other highlights from the Greenwich Concours d'Elegance include Woodrow Wilson's Rolls-Royce Silver Ghost, expected to fetch between $200,000-300,000 and a 1928 Auburn Boattail Speedster expected to garner anywhere from $175,000-225,000.