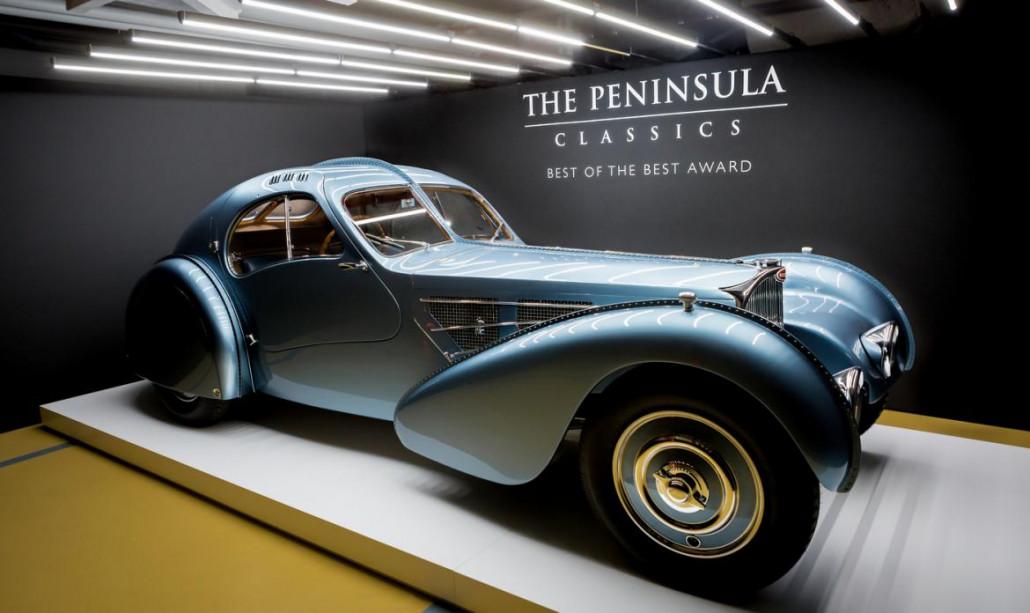 This year’s edition of the prestigious Peninsula Classics “Best of the Best” Award took place in Paris recently, with the iconic 1935 Bugatti Type 57SC Atlantic landing the top award of the night.

Every year the event brings together the winning cars from each of the eight most important concours events around the world and the champion of champions is selected by a panel of distinguished experts.

Now in its third year, the Peninsula Classics “Best of the Best” was announced at a private ceremony in Paris and the iconic Bugatti came out on top. Co-owned by the Mullin Automotive Museum in California, the same car also won the Best of Show at Chantilly Arts & Elegance Richard Mille Concours d’Etat last September.

“The Atlantic represents the pinnacle of everything I adore about the French automotive styling and widely described as the Mona Lisa of the automobile collector world,” says Peter Mullin, founder and CEO of the Mullin Automotive Museum.

“From its signature curves to its aviation-inspired rivets to the Jean Bugatti designed sleek all-aluminum body, the car is truly a remarkable piece of art. I’m very honoured to have shared it with the world amongst other worthy ‘Best of the Best’ contenders.”

The Bugatti Type 57SC Atlantic is often called the Mona Lisa of the automotive world and was designed at the height of the art deco movement by Jean Bugatti, Ettore Bugatti’s son. It is widely considered the first supercar ever made and just four examples were built, with only three in the world remaining.

This particular model was the first Type 57 Atlantic to be produced. It is also the only surviving “Aéro Coupé,” a designation given to the first two cars that were mechanically very similar to the famous Bugatti Aérolithe.

Delivered new in 1936 to Britain’s Nathaniel Mayer Victor Rothschild, third Baron Rothschild, the Atlantic has had only a handful of owners in its 80-year history.