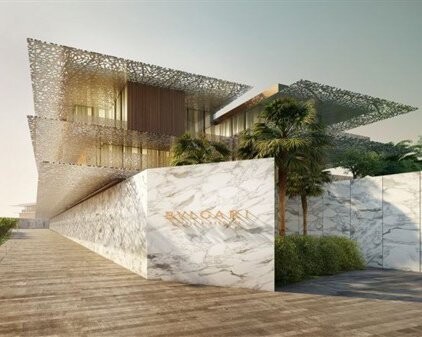 Bulgari Hotel to Open in Dubai

Bulgari Hotels and Resorts, the hospitality arm of the iconic Bulgari fashion brand, is to open its latest hotel in Dubai.

Situated at Dubai’s prestigious Jumeirah Bay island, the new residence will be spread over 1.7 million square feet and house 100 rooms and suites in the main hotel building, plus 20 additional villas.

Designed by Italian architectural firm, Antonio Citterio Patricia Viel and Partners, the hotel will be surrounded by lush landscaped gardens and boast an array of luxury facilities.

“This project is for us part of a larger plan to forge a stronger presence in the GCC. It is a privilege to work with Meraas Holding, a leader in its field, and we look forward to unveiling the Bulgari concept in Dubai as our debut offering in the region.”

The Dubai residence will be the fourth that Bulgari Hotels and Resorts have opened across the world, adding to existing properties in in Milan (2004), Bali (2006) and London (2012). Next year, they are set to open another in the Chinese city of Shanghai.