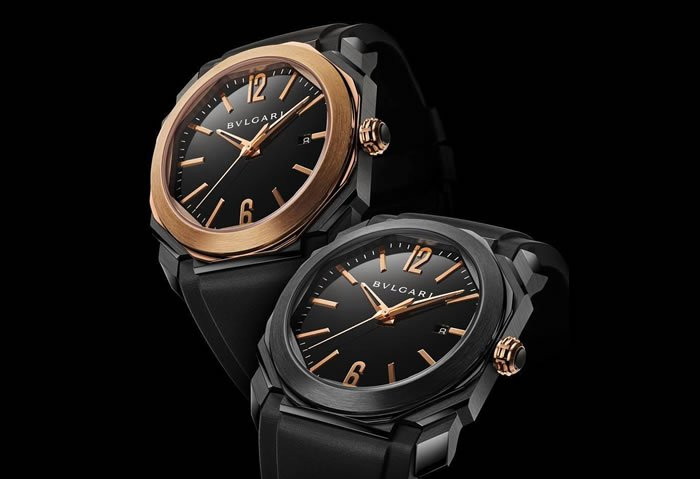 Among the array of eye-catching watches set to be showcased at the 2016 BaselWorld watch fair, which kicks off in Geneva in a month’s time, will be four new creations by Italian luxury goods brand Bulgari.

Based on the Octo Chronograph that Bulgari originally debuted in 2014, the Octo Velocissimo Ultranero has a 41mm-wide Octo case in DLC-coated black steel, a transparent sapphire crystal caseback offering a view of the movement and uses the Zenith El Primero chronograph movement that Bulgari refers to as their caliber BVL 328. This "high-frequency" 5Hz automatic chronograph movement operates at 36,000bph and has a 50-hour power reserve.

There will also be two versions of the Octo Solotempo Ultranero, available either with or without an 18-karat pink gold bezel. The pink gold bezel version has a 41mm-wide and is water resistant to 100 metre. The version without the pink gold bezel will have a matching DLC-coated steel bezel to go with the rest of the case.

In addition to the three-steel Bulgari Octo Ultranero models is the DLC-coated black titanium-cased Bulgari Octo Finissimo Tourbillon which comes in a 40mm-wide case.

Debuted in 2014, the Bulgari Finissimo Tourbillon continues to be world's thinnest tourbillon watch with its 1.95mm-thick in-house made Bulgari caliber BVL 268 Finissimo tourbillon movement which operates at 3Hz with a power reserve of 52 hours

Other notable features include an all-black case complimented with pink gold hands and hour markers.

All four watches will be on display at BaselWorld between 17 – 24 March.