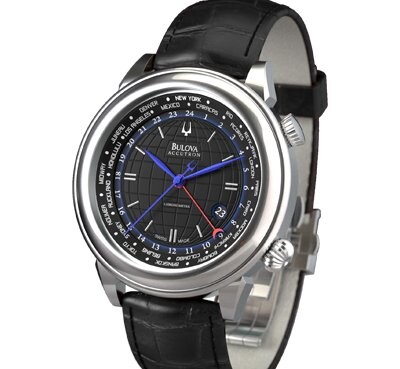 American luxury watch brand Bulova is to launch a new timepiece made as part of a collaboration with British entrepreneur and Bulova brand ambassador Sir Richard Branson.

Made in Switzerland, the Bulova Accutron Sir Richard Branson Limited Edition Watch – based on the original 1960 Accutron, the world’s first fully electronic watch – was unveiled recently in New York.

Limited to just 500 pieces, the watch carries Branson’s signature endorsement etched on the caseback. Crafted of titanium, with black alligator strap, the watch includes sapphire crystals over both the dial and the open exhibition caseback, which offers a view of the classic, 21-jewel self-winding mechanical movement in action.

"As an entrepreneur, humanitarian and pioneer, Sir Richard reflects the spirit of innovation that is at the heart of the Bulova Accutron brand," said Dennis W. Perry, Bulova Corporation President.

"Like our founder, Joseph Bulova, Sir Richard is an innovator who has had a groundbreaking effect on a number of fields. Today's new Bulova Accutron Sir Richard Branson Limited Edition Watch exemplifies the parallel between Sir Richard's relentless pursuit of new ideas and Joseph Bulova's vision of creativity and inventiveness."

Other notable features on the watch include a black dial engraved with a stylised representation of the globe, with latitude and longitude lines included. The hands are in anodized aluminium, with the standard hour, minute and second hands in blue, and the GMT hand in red, with a crescent-shaped tip.

The perimeter of the watch dial includes the names of 24 destinations, each corresponding to one of the world's 24 time zones. By adjusting the city ring to the GMT hand, wearers can instantly see the time in the selected city.

The watch will be shipped in a specially crafted limited edition case, and is scheduled for release in the fall of 2012 at a projected retail price of $3,500.