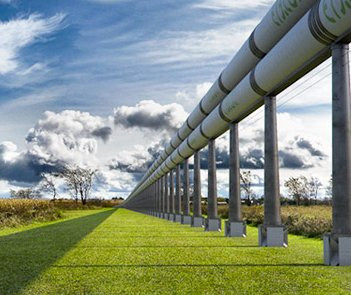 ET3, pioneers of Evacuated Tube Transport technology that could one day offer futuristic-style rapid travel across the world, have released a video of their latest transit concept.

Billed as cheaper and quieter than planes and trains, ET3’s idea is based on capsules that are capable of speeds of up to 4,000mph. With those speeds, the capsules would be able to travel from New York to Los Angeles in just 45 minutes, from Washington D.C. to Beijing in 2 hours, and to the other side of Earth in 6 hours.

The capsules work using magnetic levitation, or ‘maglev technology’, which is used in some high-speed trains today, which remove air in the tubes to eliminate drag, enabling travel at an extremely high speed.

Weighing 400 pounds, the capsules can carry up to 800 pounds – roughly six people – through the vacuum tubes at a time.

ET3 claims the infrastructure could be built at one-tenth the cost of a high speed rail and would operate fifty times more efficiently than electric cars or trains.