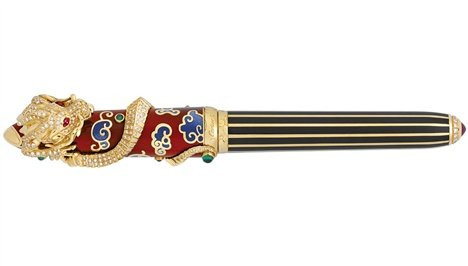 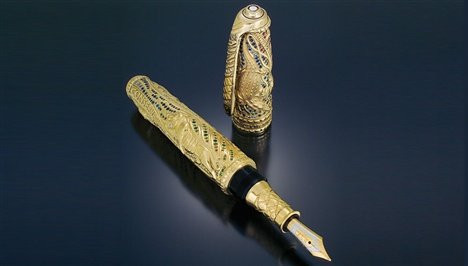 Although forgotten by many for the world of Blackberry’s and iPhones, the pleasure of writing with a truly fine pen is something that never fades. Even in today’s high-tech world, words of importance are scrawled by pen; a long-standing object of quality and beauty. Thankfully, the leading design houses are yet to forgo the allure of a luxury pen, and these are two of the best.

Revisiting its 1920s hybrid style of Art Deco and Oriental fusion, perhaps the most stunning of the collection and indeed one of the world’s finest is the Red Dragon fountain pen; created of solid gold with lacquer in red, blue and black. Only eight of these unique writing instruments are being offered by the luxury brand, with each pen featuring 522 diamonds, six emeralds and two cabochon rubies.

For the price of US$250,000, a specialized team of artists, gem setters and lacquerers will spend 100 hours creating this masterpiece that is produced only by special order.

Coiled seductively around the pen’s cap is a sculptured, three-dimensional dragon among images of lacquered-blue clouds on a background of ruby red. Also featured on the pen’s nib, these visions of cloud are symbols of eternity and luck in Chinese culture.

A far leap from its Cartier equivalent is the Curtis Australia Wildlife Warriors Gold Warrior fountain pen; a striking combination of a 450-plus gemstone barrel depicting a variety of animals in solid gold.

From native Australian koalas and kangaroos to elephants of the wildlife-protection organization Wildlife Warriors, the animals are set on a background of natural landscapes.

Crowning the cap is a half-carat champagne diamond. Only six of these elaborate gold pens were created by Curtis Australia alongside a larger collection of sterling-silver version models. Produced in Victoria, Australia, each is priced at approximately US$79,000, and as of March 2009, only two remained unsold.