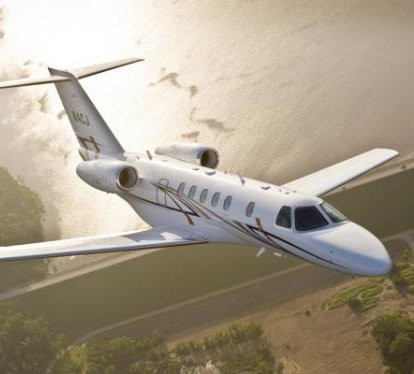 Cessna CJ4 To Be Delivered Later This Year

The highly anticipated Cessna Citation CJ4 light business jet is due to begin deliveries later this year, offering an ergonomic and stylish flight in a high performance personal jet.

The $9 million Cessna CJ4 Jet is the most recent addition to the widely sought after Cessna CJ family, consisting of the CJ1, CJ2, and CJ3. The CJ4 is essentially a stretched version of the CJ3 with aerodynamic enhancements such as the Sovereign-Style wing and the Williams FJ44-4A Engine, furthering speed and performance.

The CJ4’s electronically controlled Williams-Rolls engines allow for a maximum cruising speed of 806 km/h at an altitude of 35,000ft whilst maintain a low and quiet fuel consumption.

The cabin can be configured for up to eight passengers with a standard, belted aft lavatory and individual lighting systems and temperature control. Outfitted for most in-flight needs, the Cessna CJ4 also acts as a media room through its new Cabin Management System (CMS), which holds amenities such as XM Radio, CD, Hi-Def and Blu-Ray DVD Player, seat monitors, moving maps and input stations for MP3 Players, gaming systems and much more.

The Cessna CJ4, which is due to begin deliveries later this year, will offer the ultimate in-flight experience; whether for luxury or business you’ll arrive safely and in style.