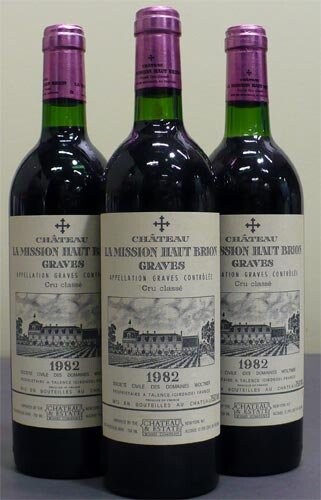 While the credit crunch has incurred lost profit across the board, the venerable wine châteaux of France are singing a different tune altogether.

WinePrices has recently released their Fine Wines 100 Index for April 20009, and the top five performing wines should come as no surprise.

In fifth place, with an average value of US$543.55 per unit, the '96 Latour of Château Latour, one of only four châteaux to achieve First Growth status in the 1855 Bordeaux Wine Official Classification, is a ruby-red wine with a nose of dark berries, violet and liquorice, an immense flavour and an exhilarating finish of sweet tannins and crystallized dark berries.

Château la Mission Haut-Brion lies near the city of Bordeaux in the Graves region and has been in operation since the 16th century. Having spent the last 130 years under the direction of the Pères Lazarists of the Mission of Saint-Vincent de Paul, the Château has notably produced one of the 1953 Graves Classification's Gran Crus. The 1982 Mission Haut-Brion has an average value of US$878.21 per unit and is April 2009's fourth best performing wine with exotic, lively aromas of roasted plum, marzipan and grilled nuts. It is a dense, medium red whose finish is extremely long with powerful tannins.
The remaining three places for April 2009's best performing wines all come from the elegant Château Lafite Rothschild in the Medoc region located northwest of Bordeaux. Currently owned by the French branch of the Rothschild family, Château Lafite was the first to achieve First Growth status in the 1855 Bordeaux classification.

The third best performing wine for April 2009 was the 1998 Lafite-Rothschild at an average value of US$499.99 per unit with a heady aroma of blackcurrant, cedar, liquorice and nutty oak. It is intensely flavoured and impressively concentrated with a subtle sweetness and a persistent finish of firm but ripe tannins.

The second best performing wine for April 2009 was the 2000 Lafite-Rothschild at an average value of US$999.99 per unit with perfumed aromas of cassis, graphite and tobacco. A stony minerality and floral nuance lift this young wine while the aristocratic finish stretches on with noble tannins.

The best performing wine for April 2009 was the 1982 Lafite-Rothschild at an average value of US$2,143.88 per unit with a highly nuanced nose of currant, roasted meat, cedar, marzipan, smoke and tobacco. Firmed by sound acids, this is a muscular Lafite that finishes with powerful, coating tannins