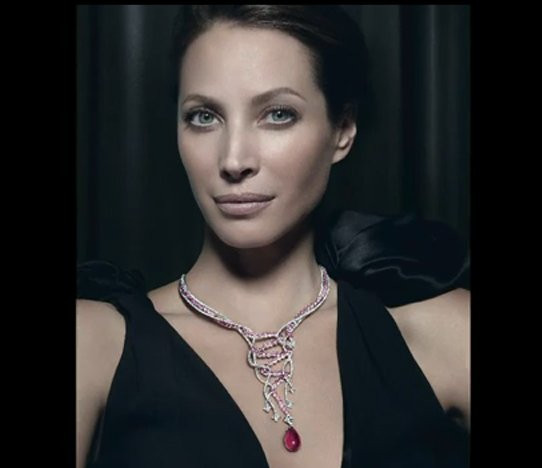 Christy Turlington, one of the world’s best known supermodels, has once again lent her stunning and timeless looks to an advertising campaign for iconic fashion house Louis Vuitton.

For the third year running, the California-born model is fronting Louis Vuitton’s jewellery campaign, appearing in a stylishly shot video for the French brand’s Autumn/Winter 2011 collection.

The video, shot by Steven Meisel, features the 42-year-old perched on a grey silk chaise lounge as she models a twisted pink diamond-encrusted necklace paired with a plunging black gown.

Another shot has the American model wearing a chic updo and a low-cut black blazer highlighting a draped necklace of spiral clusters.

Turlington is best known for representing Calvin Klein from 1987 to 2007. She has also worked with companies including Maybelline Cosmetics and Versace.

Louis Vuitton has grown to become one of the world’s leading international fashion houses since its foundation in 1854. The brand is known for creating a vast array of luxury products including travel bags, leather goods, shoes, watches, jewellery, accessories, sunglasses and books.