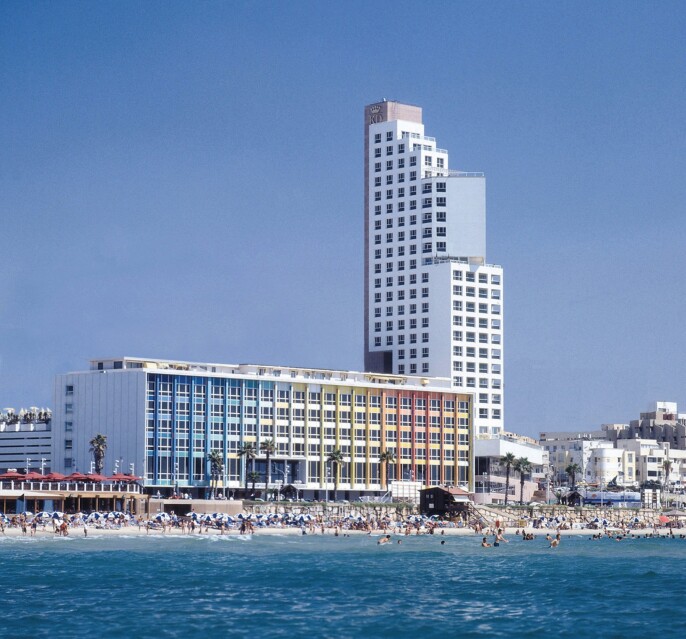 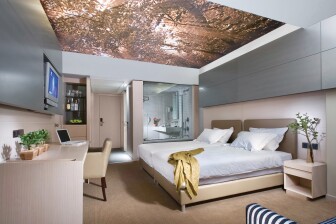 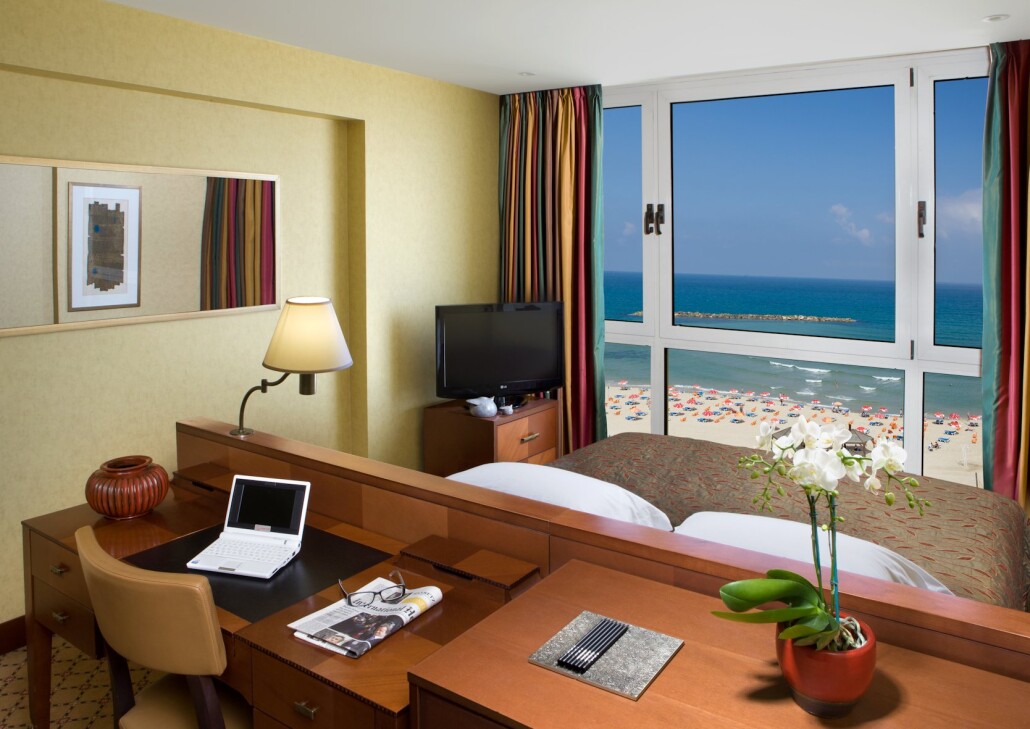 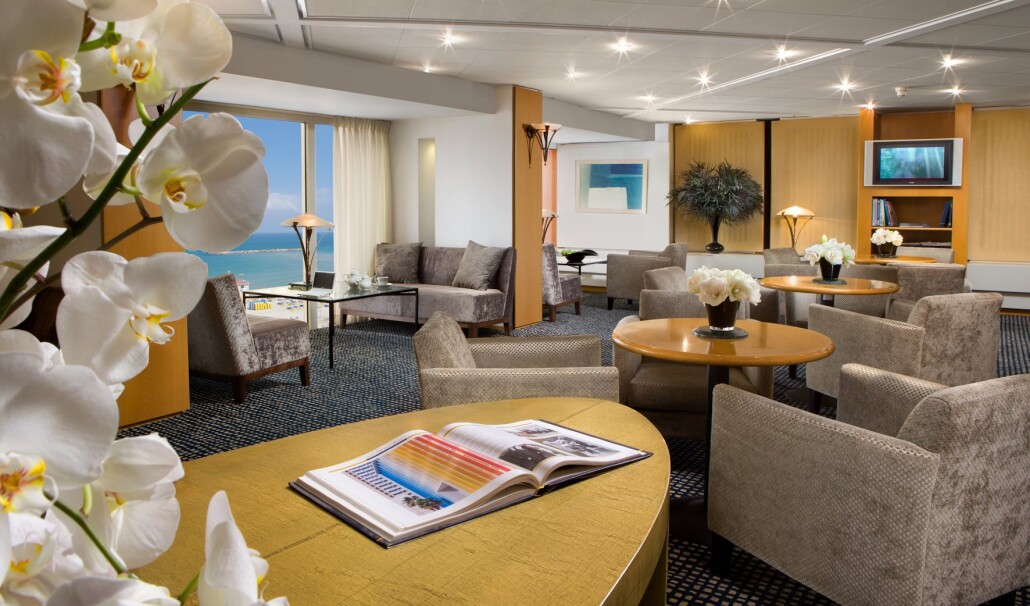 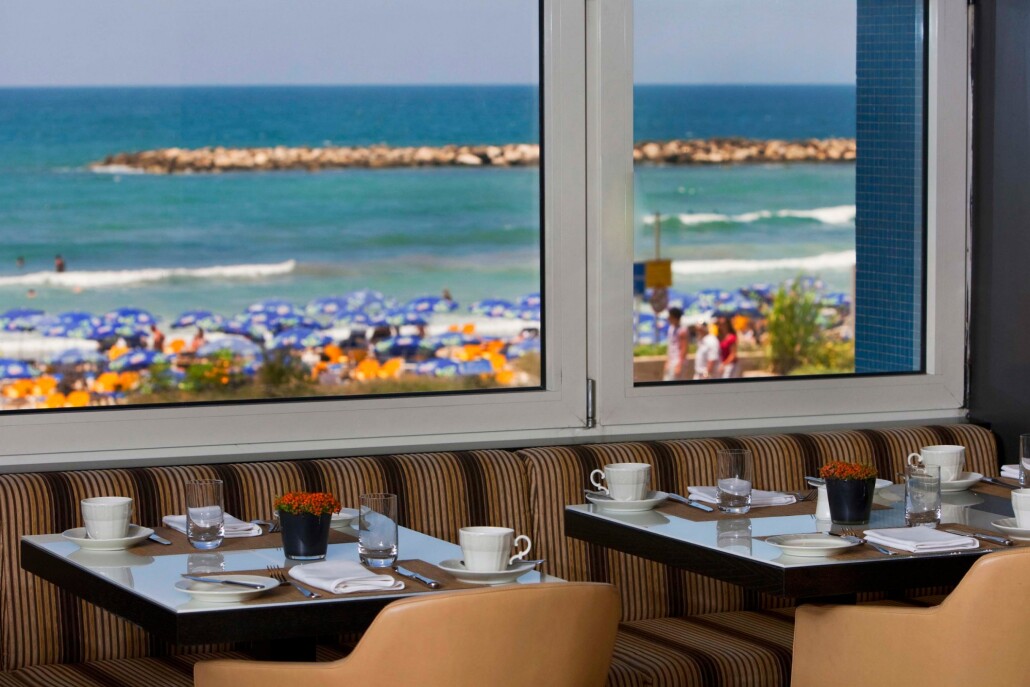 Dan Tel Aviv: The Grande Dame of a Modern City

Nestled among the numerous high-rise hotels overlooking Tel Aviv’s 10km stretch of sandy beach, many bearing the stamp of familiar international hotel chains, is the distinctive technicoloured façade of the Dan Tel Aviv.

Opened in 1953 as the first in the Dan Hotel Group’s nascent empire, the Dan Tel Aviv is the grand dame of the city’s ultra-competitive hotel scene, and has hosted everyone from Presidents and Royalty to Sharon Stone and Madonna over the years.

Boasting 286 rooms and suites, the hotel has pulled off the impressive feat of retaining its historical resonance whilst offering contemporary styling and facilities – the latter owing to a full renovation that took place in 2008.

Old and new combine harmoniously in the vast lobby, with a scattering of original 1960s and 70s furniture offering a nod to the hotel’s past, whilst sleek and silent high-speed elevators stand by to whisk guests up to their dwelling.

But for all of its interior delights, the stand-out attraction at the Dan Tel Aviv is arguably its ultra-chic spa and pool areas. Offering superb views of the sea, as well as the bustling promenade activity down below, the stylishly-shaped outdoor pool offers a refreshing respite from the pulsating Tel Aviv sun. An indoor pool and Jacuzzi provide alternative aquatic options.

For foodies too, the Dan Tel Aviv delivers with aplomb. Over the past decade Israel has undergone what is typically referred to as a “gastronomic revolution”, and the hotel sits next door to what is widely consider the country's premiere restaurant. Under the helm of renowned chef Rafi Cohen, Rafael restaurant attracts visitors from far and wide with its modern Mediterranean (non Kosher) fare.

The hotel itself offers breakfast, lunch and dinner – but it’s the breakfast buffets that will blow your mind. Israelis will often tell you that, for them, breakfast is a big deal, and looking around the mind-boggling array of food on offer each morning, from fresh fish and cheeses, cured meats, pancakes (known as ‘blintzes’), fruits and cereals, you can see how serious they are.

It’s almost worth visiting the Dan Tel Aviv for its breakfasts alone, but in reality it is merely one exceptional feature of an outstanding hotel.

Rates at the Dan Tel Aviv Hotel begin at around $390 for a double room, and rise up to $1,000-plus for the hotel’s most luxurious suites.