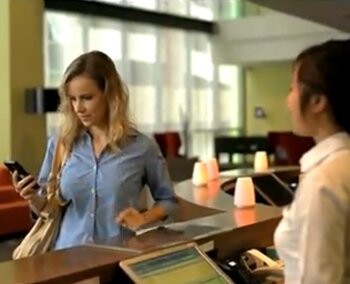 A hotel in Bangkok has become the first to adopt a new hand-held device for guests that allows them to control all aspects of their stay.

Developed by a New York based hospitality technology firm, the “Fingi” device is being offered to guests at the Aloft Bangkok hotel in the Thai capital.

Also referred to as “Aloft Touch”, the device is provided to guests upon check-in as an alternative to a traditional room key. It is used to operate all amenities in their room, including the lighting and temperature, as well as acting as a remote control for the television and stereo.

Additionally, the device can be used elsewhere in the hotel such as to request a floor in the elevators, concierge services, room service, and reservations at Crave, Aloft’s all-day restaurant.

Brendan Daly, general manager at the Aloft Bangkok, said: “Aloft takes the guest experience to the next level with Fingi technology in our Touch Rooms,”

“Today’s modern traveller will appreciate how we have incorporated the latest technology to improve their convenience, comfort and overall experience. We are giving them something they have likely never seen before, the ability to directly manage their own hotel stay.”

Aloft Touch also functions as a local phone number and wireless hotspot on and off site, allowing guests to make local calls and surf the internet at competitive rates.

Located in the heart of Bangkok's downtown district, Aloft Bangkok opened its doors to the public in May 2011.