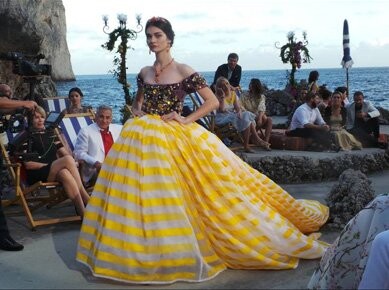 Models arrived on the island by boat from Sorrento where they congregated on a beach which served as a stage for the show.

Founders Domenico Dolce and Stefano Gabbana met in Milan, Italy in 1980 whilst working for the same fashion house. In 1982 they established a designer consulting studio which grew to become “Dolce & Gabbana”. They presented their first women’s collection in 1985 in Milan, and in the same city a year later their first store opened its doors.

Dolce & Gabbana has grown into one of the world’s most famous fashion houses.