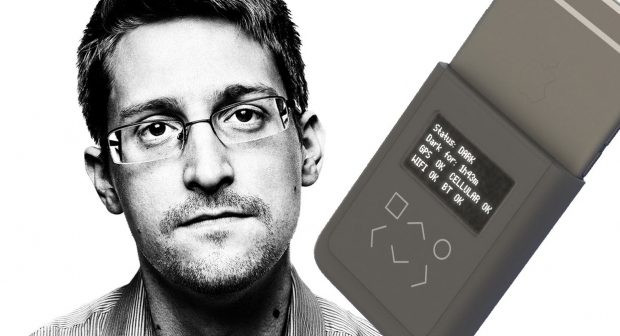 An ingenious collaboration between Edward Snowden and Andrew Huang is aiming to provide one of the most sought-after possessions in modern life: digital privacy.

During the MIT Media Lab’s invite-only Forbidden Research conference in July 2016, the elusive Edward Snowden and the enigmatic Andrew “Bunnie” Huang came together to formulate a cyber-security solution to the ever-increasing moral and legal dilemmas of unauthorised access and attacks to mobile devices.

Snowden has said that even if smartphone users put their device on airplane mode, which switches off a phone’s cellular and WiFi connections, GPS will still remain active. Thus even during travel and when off-land in areas of poor signal, third parties are still able to access your data. To combat this, the collaborative project aims to eliminate the need for multiple phone software and encryptions by providing ‘mobile surveillance resistance’.

The solution is called an Introspection Engine, an anti-snooping hardware mod for the iPhone 6 that is small enough to act as a phone case while detecting third party snooping and alerts the user if and when radio signals are being transmitted. While this may sound like a James Bond type gadget, this truly brings to light the increasing awareness and concerns surrounding gadget security.

The vision for this project from Snowden and Huang is something like a tiny oscilloscope, in the form of a battery-extender case. Its wires snake through the phone’s SIM port in order to attach to test points on the circuit board. The wires then monitor the iPhone’s radios by monitoring its antennas. The design of the device sits on the back of an iPhone 6 comfortably and has a small black and white screen on which it displays when the phone has been compromised.

Initially designed for reporters who may find themselves being tracked by government agencies, and with only a small personal budget from which to work, Snowden and Huang have stated that their prototype may be a couple of years away as they continue to fine tune the device. However, they have plans to utilise the device for mainstream mobile devices for observation of real time file manipulations and suspicious operations and even potentially blocking them.

It is worth pointing out that this technology is not new. Using an oscilloscope to reverse engineer something has been used for decades, however, its purpose as constructed by Snowden and Huang is wholly modern.

In a time of increasing concern surrounding personal and financial security around the world, the awareness of third party snooping into private information has led to some drastic measures. The sweeping changes of GDPR in May 2018 have been in the making for over seven years, setting a minimum precedent for processing data in the EU.

While this new law has some real consequences, with the maximum fine for breaching it now reaching as high as £17.5m, or 4 per cent of the company’s global turnover, companies who hold and process large amounts of consumer data are still trying to fight the burden that this will place upon them.

Snowden has made it clear that he believes these laws, while a step in the right direction, will not make individuals completely invulnerable to data snooping, particularly during international travel. Other approaches to resolving this problem include faraday cage bags (not reliable or backed by research) and active jammers (traceable, heavy battery drainers), to physical off-switches for the network components (leaky).

Rather than resorting to Snowden’s tactics of removing your camera and microphone from your phone, look to updates on this newest project and subsequent advanced anti-snooping technologies for complete awareness of when your data is being used by third parties.

"We can build targeted, minimum viable modules which are easier to inspect, maintain, and secure, with each module customised for a given set of threat scenarios."

"We can build targeted, minimum viable modules which are easier to inspect, maintain, and secure, with each module customised for a given set of threat scenarios."