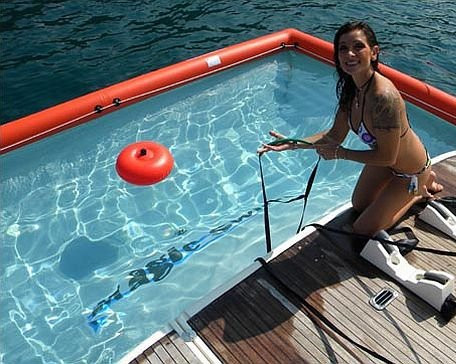 Superyachts offer people the freedom of the cruise; enjoying sun, sea and swimming. The Magic Swim is an instant, floating swimming pool designed to provide utter relaxation whilst swimming in the ocean.

The project was inspired by the amount of jellyfish and other marine creatures in the ocean. The Magic Swim provides a safe ocean swim by allowing sea water into the pool through grid covered holes, designed to stop any unwanted sea creatures appearing.

The pool is made with PVC material, which weighs between 25 and 30kg and can be set up in a matter of minutes by connecting to the peaks on the boat.

The Magic Swim is not the first of its kind; the Atreides Luxury Yacht concept broke a barrier in yacht design, but was attached to the yacht itself as a retractable pool. The Magic Swim, however, is an attachment available for any owner who wants to enjoy swimming in the ocean in complete safety and relaxation.