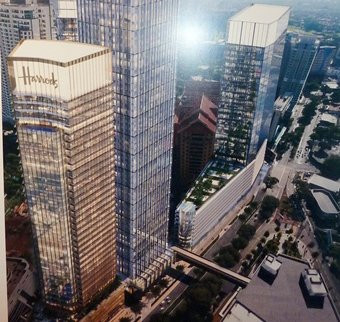 Qatar Holdings, owners of the prestigious Harrods Department store in London, have broken ground on what will be the first Harrods-branded hotel when it opens in Kuala Lumpur, Malaysia in 2018.

The Harrods Hotel Kuala Lumpur will feature 250 to 300 hotel rooms across more than 30 floors, with the project also comprising two residential towers with apartments, an office building and a retail podium.

Having purchased Harrods from the Egyptian Mohamed Al-Fayed in 2010, Qatar Holdings have since pledged to turn the already world famous brand into a “global enterprise that defines the luxury retail and leisure sectors”.

In July last year, the Doha-based fund announced plans to build a series of luxury hotels bearing the Harrods name in a host of cities around the world.

Speaking about the decision to house the first Harrods hotel in Malaysa, Qatar Holding LLC vice chairman Dr Hussain Ali Al-Abdullah, said it was due to the country’s good investment environment and Malaysia’s thriving tourism industry which sees up to 25 million visitors every year.

Amongst the other Qatari-owned locations earmarked for Harrods hotels are several in London, including Chelsea Army Barracks, the luxury apartment complex at One Hyde Park, the US embassy in Grosvenor Square and the Olympic Village in east London, which Qatar Holdings took over after the 2012 Olympic Games.