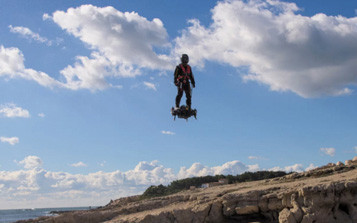 Sunbathers off the coast of France were treated to an unusual sight recently – a man hovering 50 metres over the ocean.

The gentleman in question was French inventor Franky Zapata, chief executive of Zapata Racing, who was trialling his latest technological creation, the Flyboard Air.

Images of Zapata in flight soon made it into newspapers and digital publications around the world, and interest surged even further when it was announced that the Flyboard Air would soon be made available for hire by members of the public.

The Flyboard Air is a jet-powered board with four turbo engines, or an "Independent Propulsion Unit", that propel it upwards and forwards when travelling over land or sea. It stabilises itself in a similar way to a drone and can reach heights of up to 10,000 ft and speeds of 92.3mph. The board can fly for around 10 minutes.

Zapata has previously said that anyone wanting to use the Flyboard Air will need to spend at least 100 hours practicing over water and another 20 hours over land.

This has really been a life's work," said Mr Zapata, who holds a world record for the most number of backflips in a minute using a water jet pack. "Who has never dreamt of leaping out of the water and soaring through the air, free of all constraints? This is the dream that is at the origin of the products we create."

Previous versions of the Flyboard, which are on sale, use water propulsion to lift them and can only be used on lakes. They are available for between £1,500 and £9,600. While the Flyboard Air isn't currently on sale, it will be available for rent from locations in the US and UK.

"Since 2016, we have fulfilled people's dreams by giving them the opportunity to move through the air on a totally autonomous flying board," Mr Zapata added.

Zapata and his hoverboard have already set numerous world records. In April 2016, he flew the Flyboard Air over 2,200 metres from a height of about 50 metres, setting a new world record for the longest hoverboard flight.

"Sunbathers off the coast of France were treated to an unusual sight recently – a man hovering 50 metres over the ocean."

"Sunbathers off the coast of France were treated to an unusual sight recently – a man hovering 50 metres over the ocean."