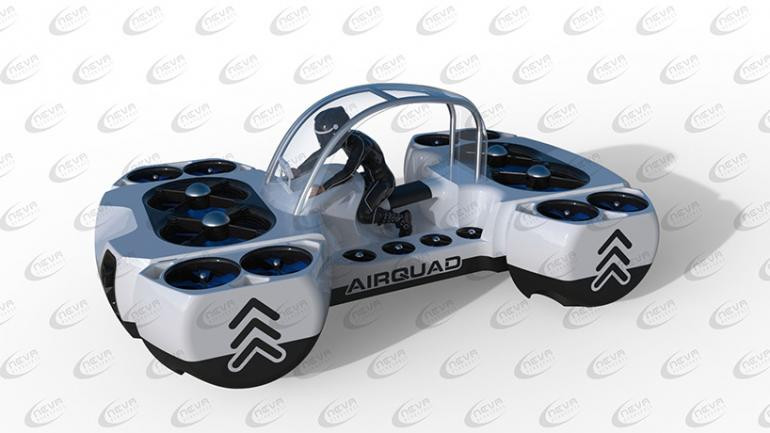 Among the array of eye-catching products currently on display at the Paris Air Show is a striking all-electric concept billed as the world’s first ‘flying quadbike’.

The latest in a succession of flying car concepts to have emerged in recent months that have been inspired by quadcopter drones, this is one of the most remarkable yet.

Designed and manufactured by Neva Aerospace, the futuristic-looking AirQuadOne concept is powered by multiple turbofans of varying sizes.

Weighing in at a little over 1,000 pounds, including 330 pounds for the batteries and a payload of 220 pounds, the flying quadbike can reach linear speeds of 50mph at altitudes of up to 3,000 feet. The battery pack allows a flight time of 30 minutes.

The AirQuadOne will be compatible with recharging stations designed for electric cars and Neva believes that an unmanned version can also replace cranes and helicopters or emergency cars.

Neva Aerospace is a UK-based consortium made up of five European companies that focus on all forms of electric aviation, from drones to aerial robotic platforms.

The AirQuadOne concept  will be on display at the Paris Air Show until 25 June.