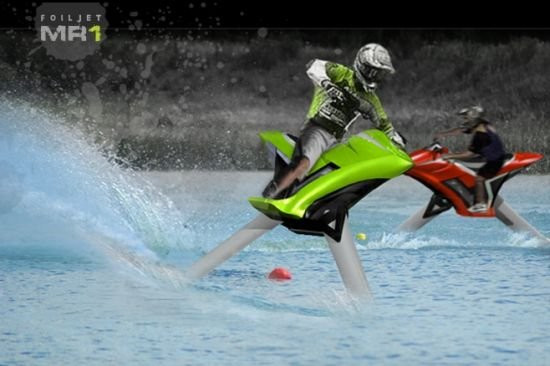 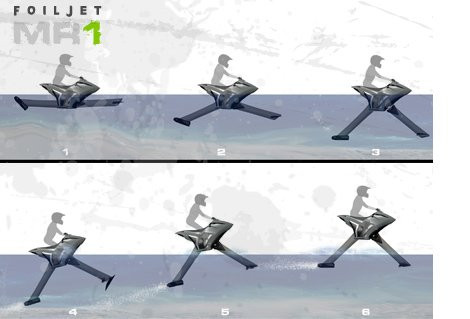 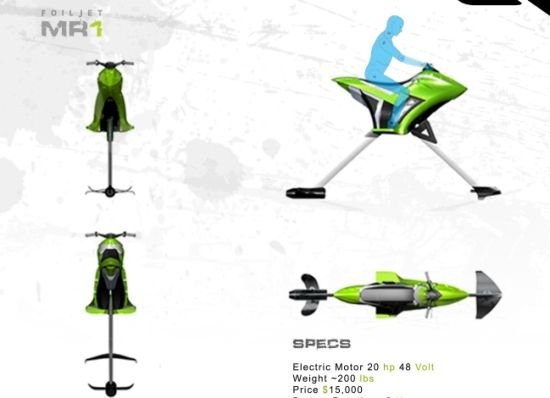 Foiljet MR1 takes PWC's to the next level

Combining the worlds of jet-skis and motor-cross, the Foiljet MR1 is the newest addition into the cutting-edge world of personal water craft concepts.

Still in the concept stage, designers Matt de Bellefeuille and Rovert Vandenham would like to take it to the prototype stage as soon as possible.

Having designed the Foiljet MR1 as a fully submerged T-shape foil system, the craft is not self-stabilizing and would require constant adjustment of the front foil's angle to keep the craft level with the surface, though it would be unaffected by surface waves. This adjustment would be made manually by a level reminiscent of a motorcycle clutch, while in larger applications it would be automated by a computer system that measures either surface height or pitch and roll to apply the continual adjustments to the front foil.

Due to the fact that hydrofoils create little or no wake and electric propulsion is nearly silent, the Foiljet MR1 could potentially be used on inland water ways located near residential areas that typically prohibit it.

"Described as the 'motorcross bike for water', the Foiljet MR1 is the latest in a long line of increasingly advanced personal watercraft technology"

"Described as the 'motorcross bike for water', the Foiljet MR1 is the latest in a long line of increasingly advanced personal watercraft technology"