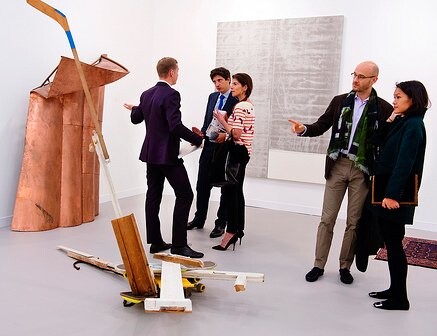 Thousands of art collectors and enthusiasts from around the world descended on London this weekend for the annual edition of the Freize Art Fair.

Now in its tenth year, the 4-day fair played host to exhibitors from 35 countries around the world, including galleries from Argentina, China, Columbia, Hungary, India, Korea and South Africa.

Housed in a bespoke temporary structure designed by architects Carmody Groarke, the fair featured a new section unseen in previous years called “Focus”, which is open to galleries established after 2001 showing up to three artists.

Other notable features this year included Frieze Projects, which saw artists commissioned to create five site-specific works for the fair; Frieze Film, consisting of artist films focussed on themes such as history and memory; Frieze Talks, a daily programme of keynote lectures and debates; and Sculpture Park, a selection of public-scale sculptures by internationally recognised artists.

For the fourth year, Champagne brand Pommery sponsored the Stand Prize., which was won by Vitamin Creative Space from Guangzhou, who secured prize of £10,000 for being voted the most innovative gallery stand at the fair.