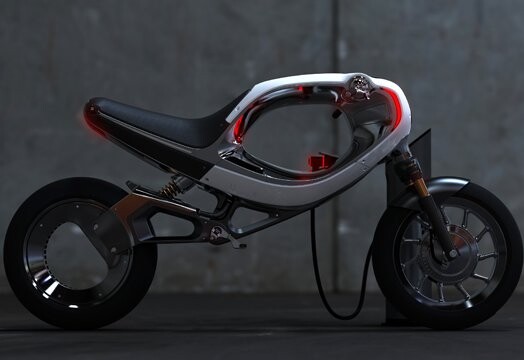 Inspired by the FZ750 Rana concept designed by Frog’s founder Hartmut Esslinger in 1985, the bike features an electric drivetrain in place of the conventional combustion unit and related mechanical components.

The motorcycle’s speed being controlled directly by the power to the electric motor, negates the need for virtually all other major mechanical components of a traditional motorcycle.

Another of the bike’s innovative features is that it stores its core components in the chassis in order to retain a low centre of gravity.

Senior Industrial Designer Jin Seok Hwang, who created the new bike concept, said: “We were very conscious about retaining the emotional impact of the iconic motorcycle silhouette however, and as such repurposed the bulky volume formerly known as the gas tank.”

“It has become an ergonomic affordance for the rider, a support underneath and in front of the rider hugging his or her bike at great speeds.

“This design element provides a continuous formal transition from the back of the seat to the front of the instrument cluster and down around the void, transforming into the new location for the bikes fuel: the batteries.”

Founded in 1969, Frog Design has grown to become one of the world’s most respected design and innovation companies.