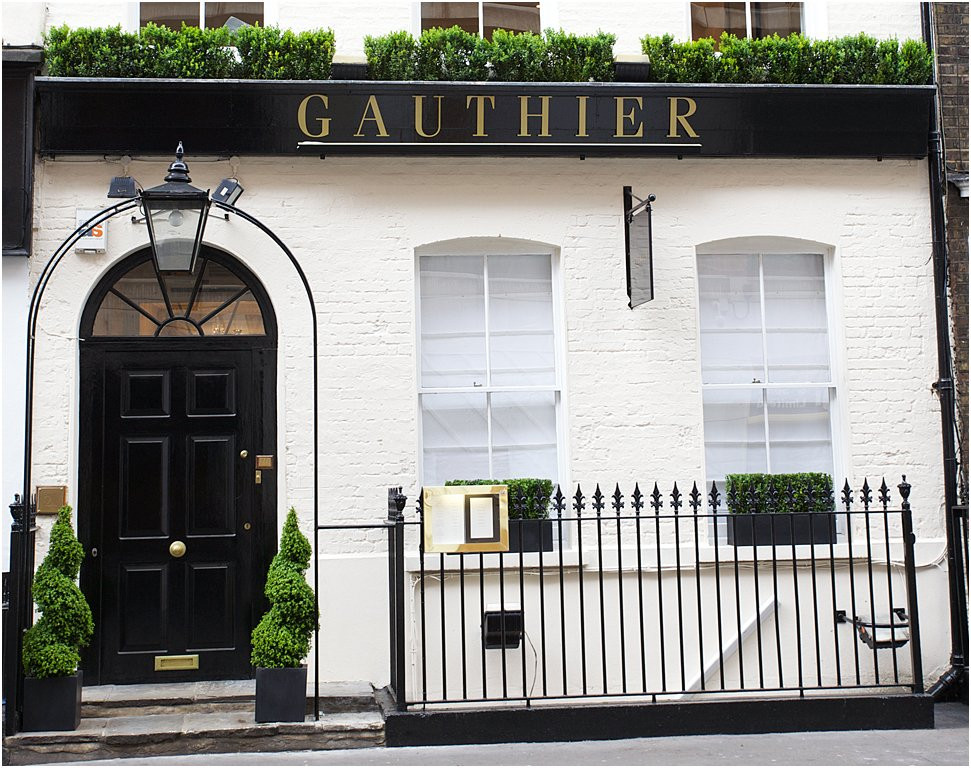 Gauthier Soho: French Fine Dining in the Heart of London

Brimming as it is with eateries of every kind, London’s bustling Soho district makes standing out from the crowd a difficult feat.

One restaurant that manages to do so is Gauthier Soho, nestled on a side street about half-way between the capital’s iconic Leicester Square and Covent Garden landmarks.

The restaurant offers French fine dining of such distinction that it was awarded a Michelin star in January 2011 for its skilled and artful contribution to London’s gastronomy scene. Upon our visit some 15 months later, we discovered that it has sustained its excellence with aplomb.

Entering the venue you are instantly transported from Soho’s bohemian mayhem into an intimate townhouse setting. Away from the hub-bub of the city, it is tempting to imagine you are in a country house rather than just metres from urban chaos.

There are two other striking things about the set-up at Gauthier Soho. Firstly, the menu provides a calorie count under every dish, a US-led fad that is now creeping around the world. And secondly, head chef and restaurant owner Alexis Gauthier claims not to use any measuring equipment in his preparation.

The inclusion of calories may, to some, be undesirable. After all, people don’t go to fine dining restaurants with the intention of being virtuous. Indeed, often they go with the very opposite intentions; as a concessionary night off from the tyranny of calorie-counting. Others, however, may consider it useful and informative.

The main problem with his claim of using no weights or measures is that, when the food is this good, it can only mean one of two things: either he’s being economical with the truth, or we have a genius in our midst. In good faith, I will choose to believe the latter.

Following an aperitif of Coulon champagne from northeastern France, along came my first course of Miso Curd with crustacean, caviar and smoked bonito broth. It arrived with a sense of theatre, revealed from under its metallic dome with the flakes of bonito on the top wiggling from the heat, almost resembling a living coral reef.

My companion had what was called a ‘Spring Opening’, which comprised broad beans, purple asparagus, green peas, and aged parmesan. It was a veritable garden on a plate, with vivid colours and ingredients that shone through.

The contrast between the two courses told us we were in safe hands. From an English spring garden to a Japanese underwater garden without any hint of a culture clash took exceptional deftness and skill.

Course two was a shared choice of Scottish langoustines, foie gras, girolle and crunchy lettuce, and sweet langoustine cream. It was superb, with the richness and decadence of the foie gras balanced impeccably against the light and sweet langoustines and lettuce. An accompanying 2008 Cotes de Gascogne country wine from Southwest France was a perfect partner.

For my next course I choose steamed halibut fillet with tomato fondue, smoked egg yolk and tender spring onions. The fish was cooked to perfection, whilst the light and lovely fondue was expertly balanced against the smoked egg yolk.

My companion had wild salmon, lightly cooked with fresh morels, peas, braised lettuce and pea cream. Given the seasonality of the menu, it was inevitable that certain ingredients would feature more than once. This time the morels were showcased with very different flavours, highlighting the chef’s ability to tease out the versatility of ingredients.

Next up for me was Wagyu beef fillet with larded spring vegetables, wild garlic, round fries and classic beef jus. The beef was moist, tender and utterly delectable and the beef jus was rich and tasty.

For my dining partner, pink roasted squab pigeon with meyer lemon and caramelised walnuts, fondant potatoes, broad beans and thyme was pronounced delicious, though I did notice envious eyes cast at my beef.

A glass each of Chateau de Ricaud from France and a 2008 Campo de Borja from Spain were both full-bodied and met our two heavy meat dishes head on without flinching.

The final course was the most anticipated. One of the world’s most famous desserts, the Golden Louis XV was conceived by Alain Ducasse at his legendary Louis XV restaurant in Paris (where Gauthier also worked) before being exported across the world. The dessert is deceptively tricky, boasting an exterior that suggests a solid shell of dark chocolate but is infact a bittersweet semi-melted liquid chocolate coating, concealing layer after layer of crisp, sweet and nutty praline underneath.

Even despite the hype, it was utterly sublime. Its diminutive proportions bellied the richness and intensity of the chocolate, and in a dessert only a few millimetres high it was remarkable how many layers of texture they managed to cram in. To produce this level of patisserie is exceptional regardless of methodology, but to do so without any weights or measures is astonishing.

It was a superlative finale to a meal that hit high marks on every count. If Alexis Gauthier continues in this vein, it is not beyond the realms of possibility that one Michelin star could soon turn into two. Highly recommended.