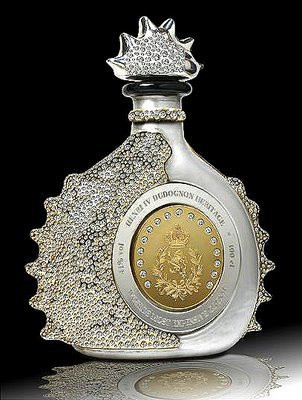 Like many of its appellation controlee brethren, Cognac is named for the region in France from which it originates. Much like Champagne, Cognac cannot truly be called Cognac unless it comes from the area surrounding the town of the same name.

Cognac must also be at least 90% composed of the three varieties of grape which grown in the Cognac region: Ugni Blanc, Folle Blanche or Colombard.

Henri IV Dudognon Heritage is just such a Cognac, named for the French king whose descendant have produced this tipple since 1776; aged 100 years in barrels air dried for the five years previous. The final product of all this waiting is a Cognac with 41% alcohol content.

The attraction of Henri IV Dudognon Heritage doesn't end there: the bottle in which the Cognac rests has been dipped in 24-carat-gold and sterling platinum. In addition, designer and jeweller Jose Davalos has adorned each bottle with 6500 brilliant cut diamonds.

This sumptuous final touch has rocketed the venerable brandy into the stratosphere of luxury, making it the most expensive Cognac in the world.