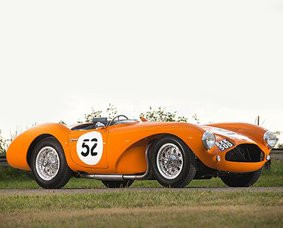 A 1955 Aston Martin DB3S Sports racing car is anticipated to fetch up to $4 million when it goes under the hammer at a California auction later this month.

Executed in aluminium, and featuring a distinctive grille and classic cut-away front fenders the 1955 DB3S is considered one of the most elegantly designed racing cars of the post war era, and boasts a fascinating back-story.

Ordered new by Dutch gentleman racer Hans Davids the striking DB3S Sports Racing Car is one of just 21 “customer cars” produced for privateer competition. Piloted by Davids, it finished on the podium at the Goodwood Cup in April 1956 as well as achieving two victories at Davids’ native track in Zandvoort.

Davids eventually sold the car to Paul Hyatt, who imported it to the US before passing through a series of distinguished caretakers, including two well-known Aston collectors who meticulously maintained the car for 48 years.

“DB3S/118 is among the best of the examples extant, with a fully documented race and ownership history and a factory engine upgrade to the 'Works competition' twin-plug head specification in its first year and which is still retains today.

“An important and fascinating car, you will not see another one in its brilliant orange Dutch national racing livery, as it was when it took first place at its native Zandvoort circuit two years running.”

Despite undergoing significant work to restore it to its former glory, the DB3S has retained its original chassis, numbered engine and bodywork, as well as coming fully documented and with known ownership from new.