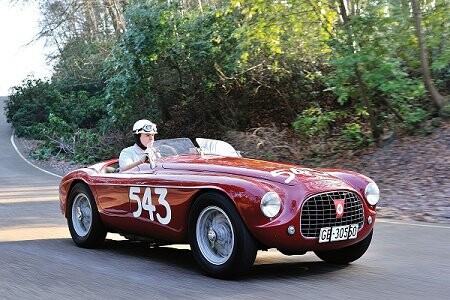 Among the array of stunning automobiles set to go under the hammer at the prestigious Concorso d’Eleganza Villa d’Este auction in May will be a historic 1952 Ferrari 212 Export Barchetta.

The Ferrari’s inclusion has been announced by RM Auctions ahead of the eagerly awaited sale, which takes place at Villa Erba, a 19th-century villa in Cernobbioin, northern Italy on May 23rd.

Fitted with a potent Tipo 212 V-12 engine, it spent its formative years in Italy, where it was campaigned extensively through 1956, enjoying numerous podium finishes

After its retirement from the racing circuit, 0158 ED went on to gain distinction at some of the world’s most competitive concours events, including the Pebble Beach Concours d’Elegance, where it has appeared on five separate occasions, claiming a Second Place award in 1966.

“While many early Ferraris were campaigned hard by their first owners, few emerged largely unscathed from the rigors of competition. 0158 ED is one such example,” says Max Girardo, Managing Director, RM Auctions – Europe.

“We’re thrilled to have been entrusted with this very special 212 Export at our Villa Erba sale. Arguably one of the finest of its kind, it is a fantastic dual-purpose Ferrari, ready for use at concours events, rallies and historic racing worldwide.”

The classic Ferrari, which is being previewed at this week’s Retromobile show in Paris, will be sold in Italy with an estimated price of more than €5 million.

Held on the shores of Lake Como, Italy every two years since 2011, RM Auctions’ sale is an eagerly anticipated highlight of the Concorso d’Eleganza Villa d’Este weekend.