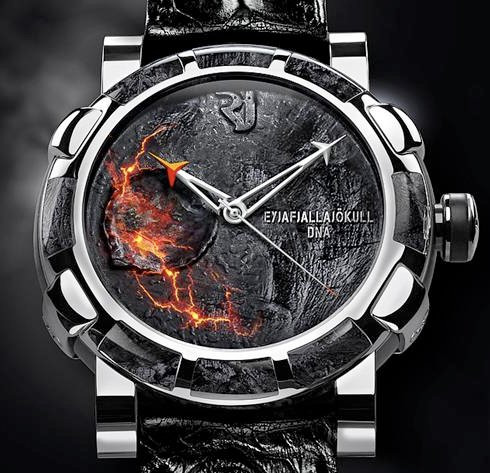 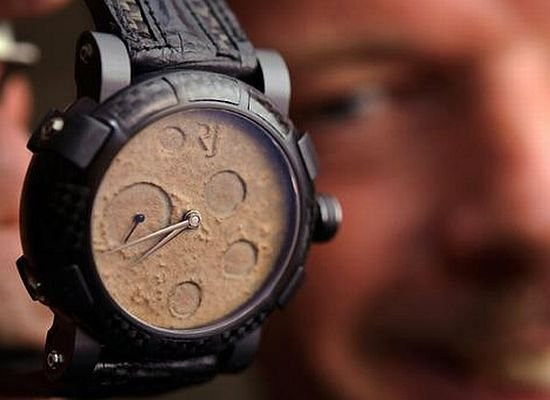 Romain Jerome has innovated some of the most unique items in the luxury market to date in the remarkably exclusive DNA Range. Romain Jerome has now taken original natural elements from the Icelandic volcano Eyjafjallajökull – creating a unique watch of great style and sophistication.

After the Icelandic Volcano Eyjafjallajökull erupted, spewing giant clouds of dust into the atmosphere, travellers all over the world were stranded.

Renowned for creating unique timepieces,Romain Jerome has captured yet another momentous global event in a high quality luxury watch, following his previous Man Landing on the Moon and the Sinking of the Titanic designs.

The Icelandic Volcano DNA timepiece incorporates the natural black stone effect of the volcano’s surface, featuring actual ash and rock from Eyjafjallajökull with an effect which gives the feeling that molten lava is bubbling just beneath the surface. According to the RJ brand, the watch “conveys memories of fire and lava, swept over by powerful images of dust and winds, and testifies to primeval energies as well as human vulnerability…”

RJ previously released the Moondust-DNA which featured genuine moon dust in the dial as well as the awe-inspiring Titanic-DNA Range which was comprised of authentic metals from the Titanic, salvaged from deep beneath the sea.

This one-off collector's item does not yet have a price tag, but promises to be a genuine and fascinating piece, which documents the eruption of the infamous volcano.